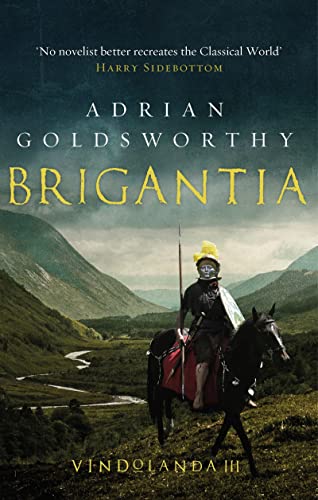 The third instalment in this series set on the frontier of Roman Britain. Flavius Ferox has been summoned to Londinium but before he sets out he must find the killer of a murdered freedman.

AD 100: BRITANNIA.
THE EDGE OF THE ROMAN WORLD.

Flavius Ferox is the hardbitten centurion charged with keeping the peace on Britannia's frontier with the barbarian tribes of the north. Now he's been summoned to Londinium by the governor, but before he sets out an imperial freedman is found brutally murdered in a latrine at Vindolanda fort - and Ferox must find the killer.

As he follows the trail, the murder leads him to plots against the empire and Rome itself, and an old foe gathering mysterious artefacts in the hope of working a great magic. Bandits, soldiers, and gladiators alike are trying to kill him, old friends turn traitor, and Ferox is lured reluctantly to the sinister haunts of the old druids on the isle of Mona, and the bitter power struggle among the Brigantes, the great tribe of the north...

'An instant classic of the genre' HARRY SIDEBOTTOM.

'An authentic, enjoyable read' THE TIMES.

'Great characters, great atmosphere, great read' * Weekend Sport *
Adrian Goldsworthy studied at Oxford, where his doctoral thesis examined the Roman army, and became an acclaimed historian of Ancient Rome. He is the author of numerous books, including Caesar, The Fall of the West, Pax Romana, and most recently Hadrian's Wall. Brigantia completes the trilogy of novels about Flavius Ferox including Vindolanda and The Encircling Sea. He is currently working on a new trilogy of Roman stories.
GOR009900790
9781784978198
1784978191
Brigantia by Adrian Goldsworthy
Adrian Goldsworthy
Used - Very Good
Hardback
Head of Zeus
2019-06-13
464
N/A
Book picture is for illustrative purposes only, actual binding, cover or edition may vary.
This is a used book - there is no escaping the fact it has been read by someone else and it will show signs of wear and previous use. Overall we expect it to be in very good condition, but if you are not entirely satisfied please get in touch with us
Trustpilot