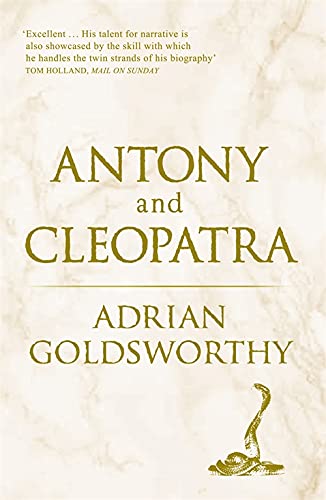 Antony and Cleopatra by Adrian Goldsworthy

The epic story of one of the most famous love affairs in history, by the bestselling author of CAESAR.

Antony and Cleopatra by Adrian Goldsworthy

The epic story of one of the most famous love affairs in history, by the bestselling author of Caesar.

The love affair between Antony and Cleopatra is one of the most famous stories from the ancient world and has been depicted in countless novels, plays and films. As one of the three men in control of the Roman Empire, Antony was perhaps the most powerful man of his day. And Cleopatra, who had already been Julius Caesar's lover, was the beautiful queen of Egypt, Rome's most important province. The clash of cultures, the power politics, and the personal passion have proven irresistible to storytellers.

But in the course of this storytelling dozens of myths have grown up. The popular image of Cleopatra in ancient Egyptian costume is a fallacy; she was actually Greek. Despite her local dominance in Egypt, her real power came from her ability to forge strong personal allegiances with the most important men in Rome. Likewise, Mark Antony was not the bluff soldier of legend, brought low by his love for an exotic woman - he was first and foremost a politician, and never allowed Cleopatra to dictate policy to him. In this history, based exclusively on ancient sources and archaeological evidence, Adrian Goldsworthy gives us the facts behind this famous couple and dispels many myths.

After providing a clear, succinct background to events, Goldsworthy's tactic is to weave the two stories into a single thread by moving seamlessly back and forth from Rome to Egypt. It works beautifully. His mastery of the sources is commendable, his historical judgement sure-footed and, as ever, he brings a winning lucidity to the description of often quite complex situations - the perfect accompaniment to any, especially Mediterranean, holiday -- Peter Jones * The Tablet *
Goldsworthy is excellent at tracing the often-bewildering succession of Ptolemys and Cleopatras as they murder, marry and spawn one another. His talent for narrative is also showcased by the skill with which he handles the twin strands of his biography, coiling the lives of Antony and Cleopatra around one another, until finally they become fused -- Tom Holland * Mail on Sunday *
Goldsworthy has a more constructive approach to the absence of evidence. He puts Cleopatra back together with Mark Antony, about whom we know more, from a wider range of ancient writing. This gives him a good starting point for some even more ambitious debunking. He is excellent in puncturing the myths of Antony as a great Roman military tactician and an experienced soldier ... He is also refreshingly frank about the unimportance of Cleopatra herself -- Mary Beard * Financial Times *
Readers who recognize Goldsworthy as Britain's most prolific and perhaps finest popular historian of Roman times will find him once again at his best ... Unlike many competing authors, Goldsworthy never disguises the scanty evidence for many historical events. Some of his best passages review surviving documents, discuss their biases, draw parallels from his vast knowledge of Roman history, and recount what probably happened ... in this thoughtful, deeply satisfying work * Yale University Press *
Goldsworthy tells this story of this dynasty with huge skill, successfully navigating the narratival rapids posed by the fact that almost every member of it was called Ptolemy, Cleopatra, or Arsinoe ... In all, it is an exotic family story of incest, greed and assassination, whose collective impact is to prompt further surprise: that Cleopatra was not only beautiful but obviously smart. Why, after 250 years of sustained in-breeding, she didn't dribble and have six fingers is completely beyond me -- Peter Heather * BBC History Magazine *
He does a splendid job of putting their lives in context and forcefully reminding us of the most salient aspects of their story while dispersing the romantic fog that has clung to them -- Christopher Silvester * Daily Express *
Goldsworthy's strengths as a military historian are on full display * Times Literary Supplement *
From the outset he makes the point that Cleopatra and Mark Antony were neither particularly likeable nor particularly successful ... Yet together, as this well-written biography shows, the two failures have become more than a sum of their parts. They have been transformed into the world's most famous lovers * History Today *
Plenty of intrigue * Catholic Herald *
Marc Antony, the soldier and strategist, and Cleopatra, the Greek queen of Egypt, could not have wanted for a more capable biographer * Good Book Guide *
Goldsworthy shows a real enthusiasm for making history accessible to all * Big Issue in the North *
Mr Goldsworthy is a rising star on the historical scene * Washington Times *
Above all Goldsworthy understands military matters -- Anthony Everitt * Independent *
Adrian Goldsworthy has a doctorate from Oxford University. His books include THE PUNIC WARS, and the volume on Roman Warfare in John Keegan's Cassell History of Warfare series. His books have been translated into more than a dozen languages and he has lectured on Roman history in both the UK and USA.
GOR003070519
9780753828632
0753828634
Antony and Cleopatra by Adrian Goldsworthy
Adrian Goldsworthy
Used - Very Good
Paperback
Orion Publishing Co
2011-07-21
560
N/A
Book picture is for illustrative purposes only, actual binding, cover or edition may vary.
This is a used book - there is no escaping the fact it has been read by someone else and it will show signs of wear and previous use. Overall we expect it to be in very good condition, but if you are not entirely satisfied please get in touch with us
Trustpilot