All in Scarlet Uniform Adrian Goldsworthy 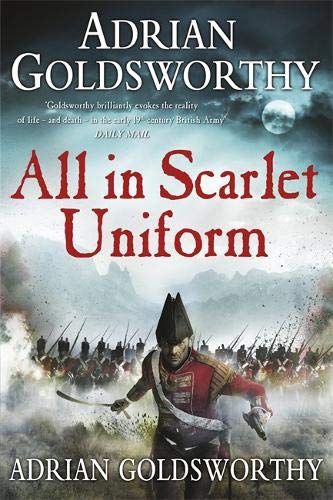 All in Scarlet Uniform by Adrian Goldsworthy

All in Scarlet Uniform by Adrian Goldsworthy

The year is 1809, and the recruiting sergeants are hard at work, as the British army gathers strength for the next phase of the campaign against Bonaparte on the Spanish Peninsula. Captain Billy Pringle of the 106th Foot, however, has a somewhat more urgent reason to leave the country: having become embroiled in an ill-advised duel with a lieutenant in the 14th Light Dragoons, a posting to Spain would avoid any awkwardness for the regiment.

Along with his friend Lieutenant Williams - whose sister Kitty was the cause of the duel - and the doughty veteran Sergeant Dobson, Pringle takes on the task of training Spanish troops to stand alongside their British allies. But what seems at first like easy duty soon turns into a desperate fight for survival as they find themselves besieged in the strategic fortress of Cuidad Rodrigo.

For Bonaparte, taking the fortress will be the first step towards pushing the British back to the sea, and the task is entrusted to one of his most daring and successful generals, Marshal Ney. And Ney in his turn has found the perfect officer to lead the assault, a man not only desperate for advancement but also thirsting for revenge - a man whom Williams knows only too well.

Adrian Goldsworthy has a doctorate from Oxford University. His first book, THE ROMAN ARMY AT WAR was recognised by John Keegan as an exceptionally impressive work, original in treatment and impressive in style. He has gone on to write several other books, including THE FALL OF THE WEST, CAESAR, IN THE NAME OF ROME, CANNAE and ROMAN WARFARE, which have sold more than a quarter of a million copies and been translated into more than a dozen languages. A full-time author, he regularly contributes to TV documentaries on Roman themes.

GOR005151623
9780297866664
0297866664
All in Scarlet Uniform by Adrian Goldsworthy
Adrian Goldsworthy
Used - Very Good
Hardback
Orion Publishing Co
2013-08-08
400
N/A
Book picture is for illustrative purposes only, actual binding, cover or edition may vary.
This is a used book - there is no escaping the fact it has been read by someone else and it will show signs of wear and previous use. Overall we expect it to be in very good condition, but if you are not entirely satisfied please get in touch with us
Trustpilot