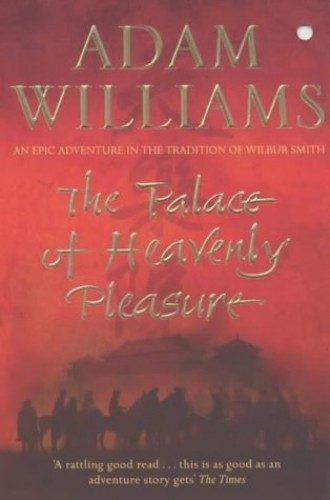 The Palace of Heavenly Pleasure by Adam Williams

The Palace of Heavenly Pleasure by Adam Williams

A group of foreigners in the northeastern town of Shishan finds the status quo upset when Helen Frances, a young woman with a middle class upbringing but a fatal flaw, arrives and falls in love with the Hon Henry Manners.

The most astonishing range of characters awaits you in this novel; the wicked brothel-keeper Madam Liu and her sadistic son Ren Ren, the pragmatic, rational missionary Dr Airton, the American zealot Septimus Harding, the equivocal Mandarin. Not to mention the wonderfully complicated anti-hero Henry Manners, the prostitutes Fan Yimei and Shen Ping, the bandit Iron Man Wang, the Mongolian shaman. And the ingenue, Helen Frances herself, whose innocence covers an unorthodox curiosity.

The Palace of Heavenly Pleasure is a great epic, sweep of a book, driven by such a powerful cocktail of history, passion, plot and character that you will be drawn completely into the world created by Adam Williams and will not want to leave. This is a story told not only with brilliant imagination, but also with the knowledge and authority of an author steeped in the traditions and environment about which he writes. 'A fantastic read about the tensions and people in a forgotten corner of Britain's empire. * Humphrey Hawksley *
If you like derring-do, murderous characters, interesting sexual practices and intrigue, this is for you . . . indulge in a heady, passionate drama. * Sunday Express *
Absolutely wonderful * Penny Vincenzi *
'Absolutely wonderful - that very rare thing, a spellbinding novel which really draws the reader into its world' Penny Vincenzi * Called us direct with quote *
Storytelling of the epic kind - this 700 page tale about sinners and lovers in 1900s China will have you gripped * Heat *
'An epic tale pulsing with intrigue,adventure and romance.' - Live Wire
An epic historical and romantic story as well as an impressive first novel. * Sunday Mirror *
'The blockbuster of the summer, set in 19th Century China.' - Good Housekeeping

'With his colourful characters and Boxer Rebellion setting, Adam Williams has created a scintillating adventure polished by a dash of history . . .

What Williams makes of his characters is a rattling good read. Full of love and loss and guts and gore and derring-do, this is as good as an adventure story gets. Some novelists are adept at driving a story on through dialogue, while others find narrative more natural. Williams is a master of both. Ths is his first novel, yet technically accomplished.

Beyond a cracking story, well conceived and executed, is there more? Yes, much. ... He excels in communicating China's simultaneous similarity and strangeness.

Entertaining, engaging and informative,this book deserves to do well.' - The Times

'This is the essential summer read for anyone who enjoys a well-written, colourful and meaty historical novel of epic proportions with a long cast of vivid, engaging and diverse characters.' - Choice
'It is hard to believe that THE PALACE OF HEAVENLY PLEASURE by Adam Williams is the work of a first-time novelist. Set in 1900, this is a sweeping epic that explores life in China prior to the Boxer Rebellion, weaving a vivid cast of characters into the political and geographical landscape.' - Sainsbury Magazine
'James Clavell left a huge gap in Far Eastern epic storytelling . . . it looks as if he finally has a successor with the appearance of Williams's novel on the Boxer rebellion of 1900. . . Williams intermingles romance, peril and murder in the old China and spikes it with emotion and a spirit of adventure. Heavenly pleasure indeed' - Publishing News
'An epic historical and romantic story as well as an impressive first novel.' - Sunday Mirror
Storytelling of the epic kind - this 700 page tale about sinners and lovers in 1900s China will have you gripped * Heat *
Intrigue, adventure and romance await, but it is Williams's vivid knowledge of China and the complexities which lie within the sleeping dragon that make this a worthy read * The Straits Times *
'If you like derring-do, murderous characters, interesting sexual practices and intrigue, this is for you . . . indulge in a heady, passionate drama.' - Daily Express
All the requisite romantic entanglements, political intrigues, and culture clashes ensue when East meets West in this superbly executed thriller set against the bloody backdrop of the Boxer Rebellion in late-nineteenth-century China. Featuring a huge cast of intricately interwoven international characters, the fast-paced narrative fairly leaps off the pages as the action takes on a breakneck speed. Caught in the throes of the understandably brutal peasant rebellion are the cosmopolitan residents of the fictional city of Shishan, including a fanatical American missionary, a compassionate Scottish doctor, the beautiful daughter of a British businessman ensnared in an unfortunate love triangle, a smooth but ethically questionable British nobleman, and a suitably inscrutable Chinese mandarin. Poised directly above the execution grounds stands the Palace of Heavenly Pleasure, a notorious brothel that plays a pivotal role in the lives of both the local and expatriate residents of Shishan. Epic in scope and execution, this ambitious first novel opens a window between two worlds poised on the brink of extinction. * Booklist *
'Both an epic adventure and a love story . . .' - SHE MAGAZINE
'A sweeping, old-style historical epic set in China at the end of the 19th century . . . Romance, danger and murder are interwoven in this enthralling yarn.' - Woman & Home
Adam Williams, whose family has lived in China since the late nineteenth century, was born and raised in Hong Kong. For the last eighteen years he has been representative in Beijing of a Far East trading conglomerate. In 1999 he received an OBE for services to Sino-British trade. Adam lives in China and Italy and has three children. To find out more, visit Adam's website www.adam-williams.net or follow him on Twitter at twitter.com/_AdamWilliams.
GOR002617963
9780340827871
0340827874
The Palace of Heavenly Pleasure by Adam Williams
Adam Williams
Used - Very Good
Paperback
Hodder & Stoughton
2004-04-12
720
N/A
Book picture is for illustrative purposes only, actual binding, cover or edition may vary.
This is a used book - there is no escaping the fact it has been read by someone else and it will show signs of wear and previous use. Overall we expect it to be in very good condition, but if you are not entirely satisfied please get in touch with us
Trustpilot