A Flight of Arrows A. J. MacKenzie 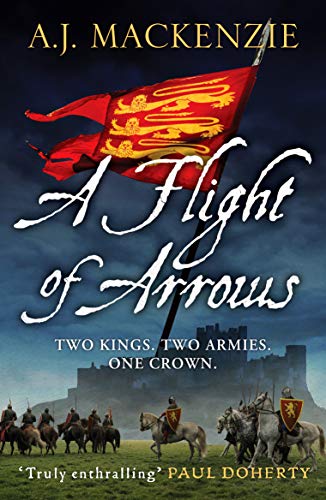 A Flight of Arrows by A. J. MacKenzie

A Flight of Arrows: A gripping, captivating historical thriller by A. J. MacKenzie

1328. After years of civil unrest between England and France, Charles IV dies, leaving no apparent heir. His closest heir to the throne is Edward III of England, but it passes instead to Charles' cousin, Phillip, spurring both countries on to war.

1346. Landing at Normandy, Edward's immense army makes inroads into French territory, burning everything in their path. But the mysterious assassination of an English knight reveals a terrible truth: there is a traitor in their midst. The king charges Simon Merrivale, the Prince of Wales' herald, with solving the case.

As the army marches on towards its destiny, at the awesome scenes of the Battle of Crecy, Simon will uncover a conspiracy that goes to the heart of the warring nations. Among the ashes and the rubble, their fate will be decided: on the battlefield... and in the shadows.

A scintillating medieval adventure of warfare and espionage, steeped in years of research, perfect for fans of David Gilman and Conn Iggulden.

Praise for A Flight of Arrows

Like one of those exquisite tapestries with interlacing strands in an array of vivid colour [...] a truly enthralling account of the events leading up to Crecy. Compulsory reading for all who enjoy that most fascinating period of English history' Paul Doherty, author of The Nightingale Gallery

'Fast-paced, action-packed and full of adventure [...] one of the best reads this year' Parmenion Books

'A rip-roaring story and devilish plot with outstanding historical detail [...] Mackenzie has created a character who will surely take his place in the canon of historical literary detectives' C. B. Hanley, author of the Mediaeval Mysteries series

'Espionage, treachery and long-buried sins come to the fore in the blood-stained fields of fourteenth-century Normandy. A compelling story of courage and betrayal - I loved it' Katherine Stansfield, author of the Cornish Mystery series

A.J. Mackenzie is the pseudonym of Marilyn Livingstone and Morgen Witzel, a husband-and-wife team of writers and historians. Morgen has an MA in renaissance diplomacy, and Marilyn has a PhD in medieval economic history. They have written two books of medieval history and several novels, including the War of 1812 series set in Canada.

GOR011271314
9781800322790
1800322798
A Flight of Arrows: A gripping, captivating historical thriller by A. J. MacKenzie
A. J. MacKenzie
The Hundred Years' War
Used - Very Good
Paperback
Canelo
2021-03-11
400
N/A
Book picture is for illustrative purposes only, actual binding, cover or edition may vary.
This is a used book - there is no escaping the fact it has been read by someone else and it will show signs of wear and previous use. Overall we expect it to be in very good condition, but if you are not entirely satisfied please get in touch with us
Trustpilot