Winnie-the-Pooh: The Goodnight Collection A. A. Milne 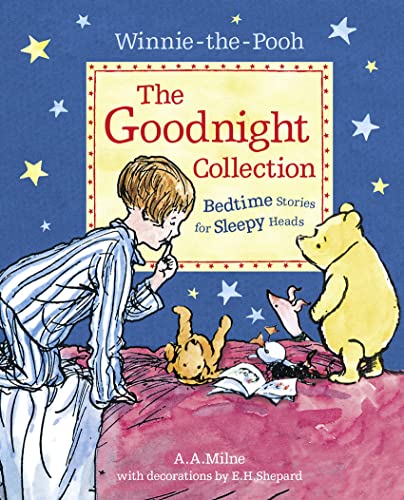 Winnie-the-Pooh: The Goodnight Collection by A. A. Milne

Winnie-the-Pooh: The Goodnight Collection: Bedtime Stories for Sleepy Heads by A. A. Milne

Winnie-the-Pooh knows all about thinking grand thoughts, playing fun games and saying wise words to himself. What better companion could there be to read about as you snuggle down to go to sleep.

This charming collection of stories and poems, selected from A.A.Milne's Winnie-the-Pooh, The House at Pooh Corner, When We Were Very Young and Now We Are Six, tells enchanting tales of Winnie-the-Pooh and his friends, accompanied by E.H.Shepard's beautiful illustrations. It is the perfect timeless bedtime treasury to read before you go to sleep and dream of the adventures to be had in the days to come.

The Goodnight Collection follows on from The Christopher Robin Collection in making the stories and poems more accessible to new readers of Winnie-the-Pooh with it's playful approach to the text and illustrations, showing the fun and imagination behind the classic stories.

Winnie the Pooh has always been a very special (albeit funny old) bear, not least of all because his books are filled with wonderful words of wisdom.', Stylist, 2017

A.A. Milne grew up in a school - his parents ran Henley House in Kilburn, for young boys - but never intended to be a children's writer. Pooh he saw as a pleasant sideline to his main career as a playwright and regular scribe for the satirical literary magazine, Punch, for which he became Assistant Editor. Writing was very much the dominant feature of A.A.Milne's life. In the course of two decades he fought in the First World War, wrote some 18 plays and three novels and fathered a son, Christopher Robin Milne in 1920.

Observations of little Christopher led Milne to produce a book of children's poetry, When We Were Very Young, in 1924, and in 1926 the seminal Winnie-the-Pooh. More poems followed in Now We Are Six (1927) and Pooh returned in The House at Pooh Corner (1928). After that, in spite of enthusiastic demand, Milne declined to write any more children's stories as he felt that, with his son growing up, they would now only be copies based on a memory.

E. H. Shepard famously illustrated both Winnie-the-Pooh and The Wind in the Willows though, like A. A. Milne, much of his career was devoted to work for the satirical magazine, Punch. To do the illustrations for Winnie-the-Pooh, Shepard observed the real Christopher Robin Milne, but not the real Pooh. The bear in the pictures is in fact based on Growler, a toy belonging to Shepard's own son.

GOR012154922
9781405294393
1405294396
Winnie-the-Pooh: The Goodnight Collection: Bedtime Stories for Sleepy Heads by A. A. Milne
A. A. Milne
Used - Like New
Paperback
Egmont UK Ltd
2019-10-01
160
N/A
Book picture is for illustrative purposes only, actual binding, cover or edition may vary.
The book has been read, but looks new. The book cover has no visible wear, and the dust jacket is included if applicable. No missing or damaged pages, no tears, possible very minimal creasing, no underlining or highlighting of text, and no writing in the margins
Trustpilot