When We Were Very Young A. A. Milne 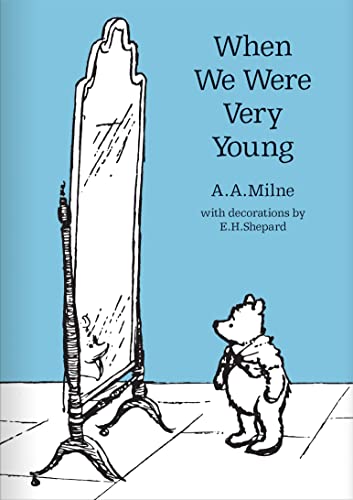 When We Were Very Young by A. A. Milne

They're changing guard at Buckingham Palace - Christopher Robin went down with Alice.'

When We Were Very Young (Winnie-the-Pooh - Classic Editions) by A. A. Milne

They're changing guard at Buckingham Palace - Christopher Robin went down with Alice.'

Curl up with A. A. Milne's classic book of poetry for children, When We Were Very Young. This is the first volume of rhymes written especially for children by Milne - as popular now as when they were first written. Featuring E. H. Shepard's original illustrations, this collection is a heart-warming and funny introduction to children's poetry, offering the same sense of humour, imagination and whimsy that we've come to expect from Milne's favourite books about Winnie-the-Pooh, that Bear of Very Little Brain.

Do you own all the classic Pooh titles?

Winnie-the-Pooh
The House at Pooh Corner
When We Were Very Young
Now We Are Six
Return to the Hundred Acre Wood
The Best Bear in all the World.

Pooh ranks alongside other beloved character such as Paddington Bear, and Peter Rabbit as an essential part of our literary heritage. Whether you're 5 or 55, Pooh is the bear for all ages.

Winnie the Pooh has always been a very special (albeit funny old) bear, not least of all because his books are filled with wonderful words of wisdom. * Stylist, 2017 *

A.A.Milne was born in London in 1882. He began writing as a contributor to Punch magazine, and also wrote plays and poetry. Winnie-the-Pooh made his first appearance in Punch magazine in 1923. Soon after, in 1926, Milne published his first stories about Winnie-the-Pooh, which were an instant success. Since then, Pooh has become a world-famous bear, and Milne's stories have been translated into approximately forty-different languages.

E. H. Shepard famously illustrated both 'Winnie-the-Pooh' and 'The Wind in the Willows' though, like A A Milne, much of his career was devoted to work for the satirical magazine Punch. To do the illustrations for 'Winnie-the-Pooh', Shepard observed the real Christopher Robin Milne, but not the real Pooh. The bear in the pictures is in fact based on Growler, a toy belonging to Shepard's own son.

GOR007403933
9781405280853
1405280859
When We Were Very Young (Winnie-the-Pooh - Classic Editions) by A. A. Milne
A. A. Milne
Winnie-the-Pooh - Classic Editions
Used - Very Good
Hardback
Egmont UK Ltd
2016-02-25
112
N/A
Book picture is for illustrative purposes only, actual binding, cover or edition may vary.
This is a used book - there is no escaping the fact it has been read by someone else and it will show signs of wear and previous use. Overall we expect it to be in very good condition, but if you are not entirely satisfied please get in touch with us
Trustpilot