The House at Pooh Corner A. A. Milne 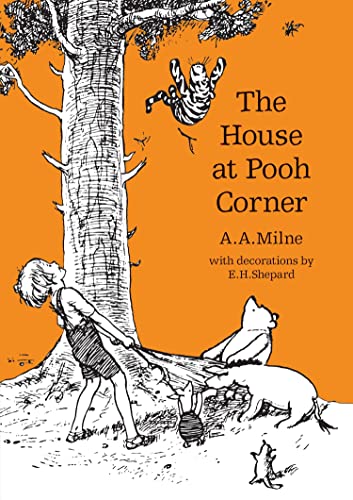 The House at Pooh Corner by A. A. Milne

One day when Pooh Bear had nothing else to do, he thought he would do something, so he went round to Piglet's house to see what Piglet was doing.'

The House at Pooh Corner (Winnie-the-Pooh - Classic Editions) by A. A. Milne

One day when Pooh Bear had nothing else to do, he thought he would do something, so he went round to Piglet's house to see what Piglet was doing.'

This is the second classic children's story by A.A. Milne about Winnie-the-Pooh and his friends in the Hundred Acre Wood. In this volume Pooh meets the irrepressible Tigger for the first time, learns to play Poohsticks and sets a trap for a Heffalump.

In this stunning edition of The House at Pooh Corner, A.A. Milne's classic characters are once again brought to life by E.H. Shepard's illustrations.

Do you own all the classic Pooh titles?

Milne's classic children's stories - featuring Piglet, Eeyore, Christopher Robin and, of course, Pooh himself - are both heart-warming and funny, teaching lessons of friendship and reflecting the power of a child's imagination like no other story before or since.

Pooh ranks alongside other beloved characters such as Paddington Bear, and Peter Rabbit as an essential part of our literary heritage. Whether you're 5 or 55, Pooh is the bear for all ages.

A.A. Milne is quite simply one of the most famous children's authors of all time. He created Winnie-the-Pooh and his friends Piglet, Eeyore, Tigger, Kanga and Roo based on the real nursery toys played with by his son, Christopher Robin. And those characters not only became the stars of his classic children's books, Winnie-the-Pooh and The House at Pooh Corner, and his poetry for children, they have also been adapted for film, TV and the stage. Through his writings for Punch magazine, A.A. Milne met E.H. Shepard. Shepard went on to draw the original illustrations to accompany Milne's classics, earning him the name "the man who drew Pooh....

GOR007924804
9781405281287
1405281286
The House at Pooh Corner (Winnie-the-Pooh - Classic Editions) by A. A. Milne
A. A. Milne
Winnie-the-Pooh - Classic Editions
Used - Very Good
Paperback
HarperCollins Publishers
2016-06-02
192
N/A
Book picture is for illustrative purposes only, actual binding, cover or edition may vary.
This is a used book - there is no escaping the fact it has been read by someone else and it will show signs of wear and previous use. Overall we expect it to be in very good condition, but if you are not entirely satisfied please get in touch with us
Trustpilot