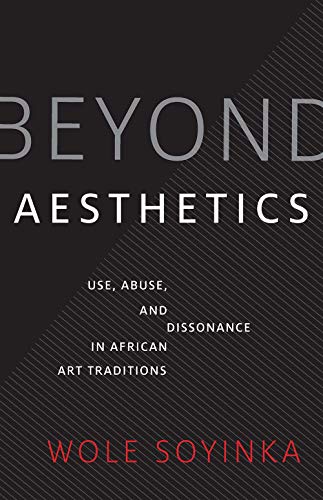 Beyond Aesthetics by Wole Soyinka

Beyond Aesthetics: Use, Abuse, and Dissonance in African Art Traditions by Wole Soyinka

An intimate reflection on culture and tradition, creativity and power, that draws on a lifetime's commitment to aesthetic encounter

The playwright, poet, essayist, novelist, and Nobel Laureate Wole Soyinka is also a longtime art collector. This book of essays offers a glimpse into the motivations of the collector, as well as a highly personal look at the politics of aesthetics and collecting. Detailing moments of first encounter with objects that drew him in and continue to affect him, Soyinka describes a world of mortals, muses, and deities that imbue the artworks with history and meaning.

Beyond Aesthetics is a passionate discussion of the role of identity, tradition, and originality in making, collecting, and exhibiting African art today. Soyinka considers objects that have stirred controversy, and he decries dogmatic efforts-whether colonial or religious-to suppress Africa's artistic traditions. By turns poetic, provocative, and humorous, Soyinka affirms the power of collecting to reclaim tradition. He urges African artists, filmmakers, collectors, and curators to engage with their aesthetic and cultural histories.
Wole Soyinka always guarantees challenging and lively reading.-Tom Phillips, Times Literary Supplement

Wole Soyinka, the great Afro-Atlantic master, speaks with authority and compassion about the art and literature of the black world. Beyond Aesthetics is insightful, essential reading.-Robert Farris Thompson, author of Flash of the Spirit and Tango: The Art History of Love

Wole Soyinka is a Nigerian playwright, poet, and political activist. He was awarded the Nobel Prize for Literature in 1986. His many publications include You Must Set Forth at Dawn and Of Africa.
NPB9780300247626
9780300247626
0300247621
Beyond Aesthetics: Use, Abuse, and Dissonance in African Art Traditions by Wole Soyinka
Wole Soyinka
Richard Cohen Lectures
New
Hardback
Yale University Press
2020-03-03
160
N/A
Book picture is for illustrative purposes only, actual binding, cover or edition may vary.
This is a new book - be the first to read this copy. With untouched pages and a perfect binding, your brand new copy is ready to be opened for the first time
Trustpilot