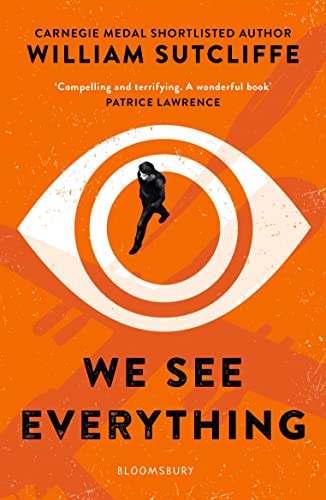 We See Everything by Mr William Sutcliffe

We See Everything by Mr William Sutcliffe

NOMINATED FOR THE CILIP CARNEGIE MEDAL 2019 SHORTLISTED FOR THE RED TENTACLE AT THE KITSCHIES 2017 A gripping and powerfully relevant thriller set in a reimagined London where constant surveillance is the norm, We See Everything simmers with tension and emotion. From internationally bestselling author William Sutcliffe, this is perfect for fans of Patrick Ness and Malorie Blackman. Lex lives on The Strip - the overcrowded, closed-off, bombed-out shell of London. He's used to the watchful enemy drones that buzz in the air above him. Alan's talent as a gamer has landed him the job of his dreams. At a military base in a secret location, he is about to start work as a drone pilot. These two young men will never meet, but their lives are destined to collide. Because Alan has just been assigned a high-profile target. Alan knows him only as #K622. But Lex calls him Dad.
I read We See Everything in my usual places, the buses and tunnels of London. It was compelling and terrifying, bringing the horror of bombardment to the streets I was travelling through (and under). This is a wonderful book - it humanises a battle that so many of us ignore and shook me into fearing about where it is all heading. * Patrice Lawrence, author of ORANGEBOY, on WE SEE EVERYTHING *
Fast-moving and brave, with lots and lots of heart. * Ahdaf Soueif on WE SEE EVERYTHING *
I read We See Everything in three sittings and was gripped throughout, held back tears throughout. The ending is both incredibly moving and politically so smart. This is a really clear-eyed, tightly crafted book and I'm so pleased to have read it. And even more pleased that it will soon be out there in the world. * Omar Robert Hamilton, author of THE CITY ALWAYS WINS on WE SEE EVERYTHING *
A cracking tale of love, drones and assassinations in north London - gripping and terrifying, a glimpse into our world that lies ahead ... * Philippe Sands, author of EAST WEST STREET on WE SEE EVERYTHING *
As beautifully written as it is chilling ... gripping and important. * Jill Murphy, Bookbag on WE SEE EVERYTHING *
A novel for all ages that is full of heart, hope and humanity. A terrific achievement. * Suzi Feay, FINANCIAL TIMES on THE WALL *
A haunting fable celebrating the healing power of nature * GUARDIAN on THE WALL *
Sutcliffe's fable, inspired by a visit to the West Bank, can't fail to excite and move. * FINANCIAL TIMES on THE WALL *
A disturbing and thought-provoking book which simmers with heat, anger and fear * Independent on Sunday - The Wall *
Will draw in young readers preoccupied with society, challenging parents, and their own fears ... An often suspenseful tale. * NEW YORK TIMES on THE WALL *
This is wholly realistic fiction detailing a boy's coming-of-age in a real-life political situation. * KIRKUS REVIEWS on THE WALL *
Unmissable. * Nick Tucker, Books for Keeps, Book of the Year on CONCENTR8 *
A satire on modern urban life ... It is a gritty, compelling eye-opener on the treatment of ADHD. * DAILY TELEGRAPH on CONCENTR8 *
There is political expose; there is comedy and one hostage-taker even achieves a kind of tragic-hero status. This might just become a 21st-century YA classic. * JEWISH CHRONICLE on CONCENTR8 *
Concentr8 by William Sutcliffe feels like a realism, though actually it's a fascinating dystopian satire and a critique of the over-diagnosis of ADHD, the way we treat young people more generally and the power of Big Pharma ... A book with a serious mission. * HERALD on CONCENTR8 *
William Sutcliffe is the author of twelve novels, including the international bestseller Are You Experienced? and The Wall, which was shortlisted for the Carnegie Medal. He has written for adults, young adults and children, and has been translated into twenty-eight languages. His 2008 novel Whatever Makes You Happy is now a Netflix Original film starring Patricia Arquette, Felicity Huffman and Angela Bassett. It was released in August 2019 under the title Otherhood. His latest novel, The Gifted, The Talented and Me, was described by The Times as `dangerously funny' and by the Guardian as `refreshingly hilarious'.
GOR009227694
9781408890189
1408890186
We See Everything by Mr William Sutcliffe
Mr William Sutcliffe
Used - Very Good
Paperback
Bloomsbury Publishing PLC
2018-08-09
272
N/A
Book picture is for illustrative purposes only, actual binding, cover or edition may vary.
This is a used book - there is no escaping the fact it has been read by someone else and it will show signs of wear and previous use. Overall we expect it to be in very good condition, but if you are not entirely satisfied please get in touch with us
Trustpilot