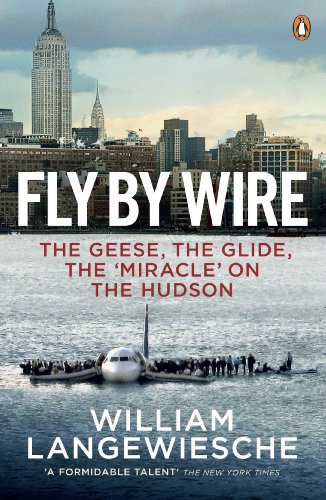 Fly By Wire by William Langewiesche

From the testing laboratories where engineers struggle to build a jet engine that can resist bird attacks, through the creation of the A320 in France, to the political and social forces that have sought to minimize the impact of revolutionary fly-by-wire technology, this work lets us question our assumptions about human beings in modern aviation.

Fly By Wire: The Geese, The Glide, The 'Miracle' on the Hudson by William Langewiesche

On January 15, 2009, a US Airways Airbus A320 had just taken off from LaGuardia Airport in New York, when a flock of Canada geese collided with it, destroying both of its engines. Over the next three minutes, the plane's pilot Chelsey "Sully" Sullenberger, managed to glide to a safe landing in the Hudson River. It was an instant media sensation, the "The Miracle on the Hudson", and Captain Sully was the hero. But, how much of the success of this dramatic landing can actually be credited to the genius of the pilot? To what extent is the "Miracle on the Hudson" the result of extraordinary - but not widely known, and in some cases quite controversial - advances in aviation and computer technology over the last twenty years?

From the testing laboratories where engineers struggle to build a jet engine that can systematically resist bird attacks, through the creation of the A320 in France, to the political and social forces that have sought to minimize the impact of the revolutionary fly-by-wire technology, William Langewiesche assembles the untold stories necessary to truly understand "The Miracle on the Hudson", and makes us question our assumptions about human beings in modern aviation.

A wonderful story expertly told, and the ending is not just happy but uplifting: almost everyone involved comes out of it not just safely but extremely well. Except the geese. Their day totally sucked. * Geoff Dyer, Observer *
Enthralling piece of reportage ... concisely written and compelling ... Langewiesche's unblinkered analysis of Sullenberger's five-minute glide into history reveals the more complicated truth behind the creation of a modern hero * Sunday Times *
A crisp, meticulously and dramatically told account of the as yet unresolved story of how humans and advanced technology are learning to form a partnership ... [Langewiesche] writes as if his pen has wings, his laptop a pair of General Electric turbofans * Guardian *
Langewiesche is at his best ... deconstructing the modern media hero * Financial Times *
Brilliant ... Langewiesche explores the approach to this moment, from the flock of Canada geese that wrecked both engines to the expertise of Sullenberger; who used the A320's automated 'fly-by-wire' system to ditch the plane with such success * Independent *
William Langewiesche is an author and journalist. He is currently intenraitonal correspondent for Vanity Fair, having made his name writing for Atlantic Monthly. His strong, evocative prose is used to devastating effect on a range of issues. Before embarking on a writing career he spent two decades as a professional pilot, having performed his first solo flight by the age of fourteen. He has been termed one of the leading writers of The New New Journalism, a group of writers who have secured a place at the centre of contemporary American literature, as Tom Wolfe and The New Journalism did in the sixties.
GOR001830201
9780141046747
0141046740
Fly By Wire: The Geese, The Glide, The 'Miracle' on the Hudson by William Langewiesche
William Langewiesche
Used - Very Good
Paperback
Penguin Books Ltd
2010-02-04
208
N/A
Book picture is for illustrative purposes only, actual binding, cover or edition may vary.
This is a used book - there is no escaping the fact it has been read by someone else and it will show signs of wear and previous use. Overall we expect it to be in very good condition, but if you are not entirely satisfied please get in touch with us
Trustpilot