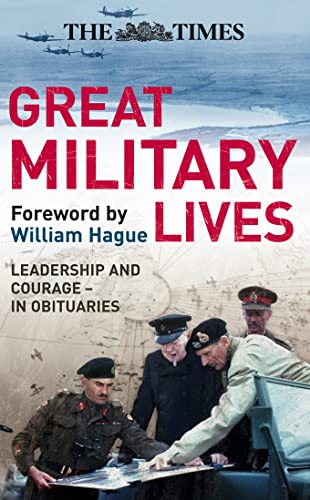 The Times for over 150 years has been providing the most respected and perceptive verdicts on the lives of outstanding individuals. The Times Great Military Lives is an authoritative and fascinating collection of obituaries depicting the great military commanders of the 19th and 20th centuries.

The Times Great Military Lives: Leadership and Courage - from Waterloo to the Falklands in Obituaries by William Hague

The Times for over 150 years has been providing the most respected and perceptive verdicts on the lives of outstanding individuals. The Times Great Military Lives is an authoritative and fascinating collection of obituaries depicting the great military commanders of the 19th and 20th centuries.

The obituaries collected in this volume are of outstanding military commanders all of whom were remarkable men. Sometimes complex and difficult, often intellectually brilliant and physically brave, always with the confidence and clarity of mind to take the difficult decisions which might carry a vital battle or turn a campaign. Above all, they were great leaders of men, ready to bear the lonely responsibility of high command, ever aware that they had the lives of thousands - even the fate of nations - in their hands.
The obituaries are reproduced here as they were printed at the time, with the contemporary assessment followed in each case by a current perspective by Major-General Michael Tillotson, military obituaries writer for The Times, who with Ian Brunskill, the paper's obituaries editor, has selected the subjects for inclusion.
Great Military Lives tells stories of grand strategy, tactical boldness, and courage and ingenuity under fire. In depicting an age of almost ceaseless conflict, it bears witness to an enduring ideal of selfless service - on land, at sea and in the air - to which those fortunate enough to enjoy peace will always owe so much.
Those commanders featured include:
Wellington, Montgomery, Patton, Trenchard, MacArthur, Slim, Ulysses S Grant, Robert E Lee, Giuseppe Garibaldi, Sitting Bull, Count Helmuth Von Moltke, Macmahon, Cetywayo, Togo, Lord Roberts, Paul Von Hindenburg, Erich Von Ludendorff, Lord Fisher, Foch, Haig, Beatty, Scheer, Kemal Ataturk, Lord Allenby, Gustaf Mannerheim, Gerd Von Rundstedt, Heinz Guderian, Earl Wavell, Sir Mav Horton, Alanbrooke, Sir Claude Auchinleck, Cunningham, Karl Doenitz, Erwin Rommel, Eisenhower, Albrecht Kesselring, Nimitz, Erich Von Manstein, Rokossovsky, Zhukov, Lord Dowding, Sir Arthur Harris, Adolf Galland, Lord Slim, Orde Wingate, Matthew B Ridgway, Sergei Gorshkov, Sir Walter Walker, Fleet Lord Fieldhouse.

William Hague is the best-selling author of William Pitt the Younger, published in 2004 to rapturous reviews and was chosen as History Book of the Year in the British Book Awards. At Oxford, he was President of both the Union and the University Conservative Association. He has been MP for Richmond, Yorkshire since 1989. He joined the Cabinet in 1995 as Secretary of State for Wales, and was leader of the Conservative Party from June 1997 to June 2001. He is now Shadow Foreign Secretary. Educated at the universities of Oxford and Hamburg, Ian Brunskill joined The Times in 1991. He succeeded the political commentator Anthony Howard as Obituaries Editor in February 1999, and took on the additional duties of Letters Editor in 2005; he is currently assistant editor. He is editor of The Times Great Lives (2005), The Times Great Victorian Lives (2007) and The Times Guide to the House of Commons (2015).
GOR001378133
9780007276707
0007276702
The Times Great Military Lives: Leadership and Courage - from Waterloo to the Falklands in Obituaries by William Hague
William Hague
Used - Very Good
Hardback
HarperCollins Publishers
2008-09-01
352
N/A
Book picture is for illustrative purposes only, actual binding, cover or edition may vary.
This is a used book - there is no escaping the fact it has been read by someone else and it will show signs of wear and previous use. Overall we expect it to be in very good condition, but if you are not entirely satisfied please get in touch with us
Trustpilot