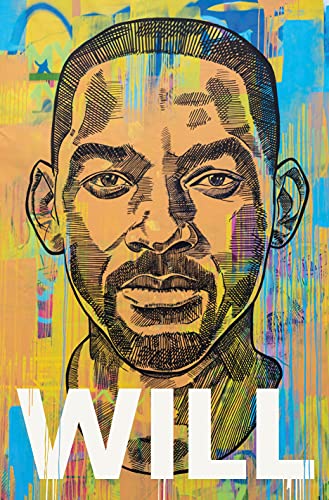 Will by Will Smith

Will by Will Smith

'The best memoir I ever read'
- Oprah Winfrey

One of the most dynamic and globally recognized entertainment forces of our time opens up fully about his life, in a brave and inspiring book that traces his learning curve to a place where outer success, inner happiness, and human connection are aligned. Along the way, Will tells the story in full of one of the most amazing rides through the worlds of music and film that anyone has ever had.

Will Smith's transformation from a fearful child in a tense West Philadelphia home to one of the biggest rap stars of his era and then one of the biggest movie stars in Hollywood history, with a string of box office successes that will likely never be broken, is an epic tale of inner transformation and outer triumph, and Will tells it astonishingly well. But it's only half the story.

Will Smith thought, with good reason, that he had won at life: not only was his own success unparalleled, his whole family was at the pinnacle of the entertainment world. Only they didn't see it that way: they felt more like star performers in his circus, a seven-days-a-week job they hadn't signed up for. It turned out Will Smith's education wasn't nearly over.

This memoir is the product of a profound journey of self-knowledge, a reckoning with all that your will can get you and all that it can leave behind. Written with the help of Mark Manson, author of the multi-million-copy bestseller The Subtle Art of Not Giving a F*ck, Will is the story of how one exceptional man mastered his own emotions, written in a way that can help everyone else do the same. Few of us will know the pressure of performing on the world's biggest stages for the highest of stakes, but we can all understand that the fuel that works for one stage of our journey might have to be changed if we want to make it all the way home. The combination of genuine wisdom of universal value and a life story that is preposterously entertaining, even astonishing, puts Will the book, like its author, in a category by itself.

IT'S THE BEST MEMOIR I'VE EVER READ

Will Smith (Author)
Will Smith is an actor, producer and musician, two-time Academy Award nominee, Grammy Award and NAACP award winner who has enjoyed a diverse career encompassing films, television and multi-platinum records.

Starting as a rapper in 1985, Smith is best known for his acting roles in The Fresh Prince of Bel-Air, I AM LEGEND, the BAD BOYS and MEN IN BLACK film series, HITCH and most recently, ALADDIN. His vast filmography also includes transformative portrayals of true-life icons in ALI and THE PURSUIT OF HAPPYNESS, both which garnered him Academy Award nominations, as well as his role in CONCUSSION. Smith recently produced and starred in 2020's biggest box office hit, BAD BOYS FOR LIFE, in addition to producing and appearing in HBO Max's emotional and most watched, The Fresh Prince of Bel-Air 30th Anniversary Reunion special.

Next up, Smith will produce and star as Richard Williams, infamous father of American icons Venus and Serena Williams, in Warner Brothers' KING RICHARD, which will release on November 19th. This summer, Smith begins production on Apple's upcoming scripted action thriller EMANCIPATION, directed by Antoine Fuqua, and produced by his Westbrook Studios.

In 2019, Smith launched his media company, Westbrook Inc. alongside Jada Pinkett Smith, Miguel Melendez and Kosaku Yada, which focuses on empowering artists to tell stories that connect with a global audience. Westbrook houses Westbrook Studios, Westbrook Media, the digital content studio, social media management, and creative brand incubator, and direct to consumer business, Good Goods. Westbrook Studios is home to the Emmy (R) nominated Facebook Watch series, Red Table Talk and is rapidly expanding its footprint in entertainment, serving as the studio home to all new premium TV and motion picture projects. Smith will serve as a producer through Westbrook on his upcoming projects including KING RICHARD, EMANCIPATION, and PLANES, TRAINS & AUTOMOBILES. Westbrook Media most recently produced KING RICHARD and EMANCIPATION. Additionally, they produced the 30th anniversary reunion special of The Fresh Prince of Bel-Air and the Snap series Will From Home. In response to the stay-at-home order Will From Home featured appearances by Smith's family, celebrity friends and everyday people who were also isolating indoors. The media company also recently announced Peacock's unprecedented two season order of Bel-Air, a dramatic reimagining of the Fresh Prince series. He and his wife also founded the Will and Jada Smith Family Foundation to benefit inner-city community development, youth educational projects and under-privileged children and their families.

Mark Manson (Author)
Mark Manson is the #1 New York Times bestselling author of Everything is F*cked: A Book About Hope and The Subtle Art of Not Giving a F*ck: A Counterintuitive Approach to Living a Good Life, the mega-bestseller that reached #1 in fourteen different countries. Mark's books have been translated into more than 50 languages and have sold over 12 million copies worldwide.

Mark runs one of the largest personal growth websites in the world, MarkManson.net, a blog with more than two million monthly readers and half a million subscribers. His writing is often described as 'self-help for people who hate self-help' -- a no-BS brand of life advice and cultural commentary that has struck a chord with people around the globe. His writing has appeared in The New York Times, Wall Street Journal, TIME Magazine, Forbes, Vice, CNN, and Vox, among many others. He currently lives in New York City.