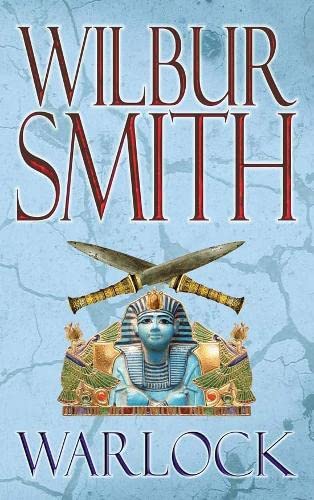 Set in Egypt, and following on from River God and The Seventh Scroll, Warlock is the prequel to the new Wilbur Smith hardback The Quest which marks the return of one of the world's finest adventure writers

Hidden away in the vast and forbidding deserts of North Africa, Taita has passed the years since the death of his beloved Queen Lostris in prayer and study. He has become the Warlock, wise in the lore of the ancient Gods, an adept of magic and the supernatural.

Now Taita answers the summons from the beyond. He leaves the desert vastness and returns to the world of men, to find himself plunged into a terrible conflict against the forces of evil which threaten to overwhelm the throne and the realm of Egypt, and to destroy the young prince Nefer who is the grandson of Queen Lostris.

With vivid depictions of battle and intrigue, of love and passion, with fascinating characters both good and evil, Wilbur Smith brings to life in colourful detail the world of ancient Egypt. This is a masterful feat of story telling by one of the world's best selling authors.

"Action is Wilbur Smith's game, and he is a master."--"The Washington Post Book World" "Fascinating...[a] magical sequel to "River God,""--"Tulsa World" "Brilliant...irresistible and impossible to put down."--"Times Record News "(Wichita Falls, TX)
Wilbur Smith was born in Central Africa in 1933. He was educated at Michaelhouse and Rhodes University. He became a full-time writer in 1964 after the successful publication of When the Lion Feeds, and has since written over thirty novels, all meticulously researched on his numerous expeditions worldwide. His books are now translated into twenty-six languages.
GOR001162356
9780330449946
033044994X
Warlock by Wilbur Smith
Wilbur Smith
The Egyptian Novels
Used - Good
Paperback
Pan Macmillan
2007-04-06
704
N/A
Book picture is for illustrative purposes only, actual binding, cover or edition may vary.
This is a used book - there is no escaping the fact it has been read by someone else and it will show signs of wear and previous use. Overall we expect it to be in good condition, but if you are not entirely satisfied please get in touch with us
Trustpilot