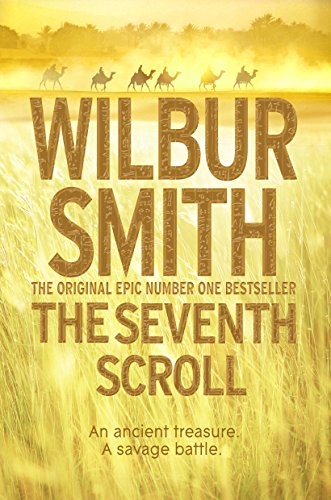 The Seventh Scroll by Wilbur Smith

Following on from River God, and prequel to Warlock and The Quest, comes this triumphant African adventure

The Seventh Scroll by Wilbur Smith

Two archaeologists find themselves in a desperate race for ancient treasure in Wilbur Smith's fascinating tale of Egypt, The Seventh Scroll.

A fading papyrus, nearly four thousand years old. Within it lie the clues to a fabulous treasure from an almost forgotten time . . . a riddle that becomes a savage battle across the unforgiving terrain of North Africa.

When her husband is brutally murdered, beautiful half-English, half-Egyptian Royan Al Simma is forced to seek refuge in England. With eminent archaelogist Nicholas Quenton-Harper, she can pick up the pieces of her shattered life and find the courage to return to Ethiopia. For Duraid. And for the dreams of an ancient Pharoah . . . Because others will stop at nothing to claim the prize as their own.

Wilbur Smith was born in Central Africa in 1933. He was educated at Michaelhouse and Rhodes University. He became a full-time writer in 1964 after the successful publication of When the Lion Feeds, and has since written over thirty novels, all meticulously researched on his numerous expeditions worldwide. In addition to his Egyptian novels, River God, The Seventh Scroll, Warlock and The Quest, his other titles include the successful The Courtneys and The Ballantynes series, Those in Peril and Vicious Circle, featuring security operative Hector Cross, and The Sunbird. His books are now translated into twenty-six languages.
GOR006763101
9781447267119
1447267117
The Seventh Scroll by Wilbur Smith
Wilbur Smith
The Egyptian Novels
Used - Very Good
Paperback
Pan Macmillan
2014-10-09
720
N/A
Book picture is for illustrative purposes only, actual binding, cover or edition may vary.
This is a used book - there is no escaping the fact it has been read by someone else and it will show signs of wear and previous use. Overall we expect it to be in very good condition, but if you are not entirely satisfied please get in touch with us
Trustpilot