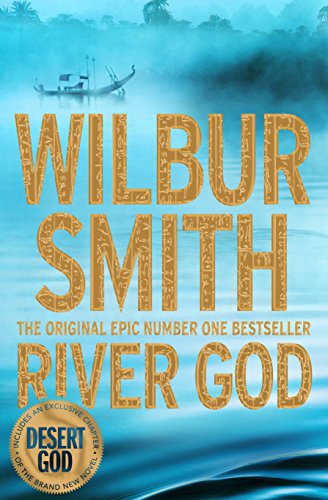 River God, the first in Wilbur Smith's blockbusting Egyptian Novels, is a thrilling adventure set amid the mysteries of ancient Egypt.

Ancient Egypt. Land of the Pharaohs. A kingdom built on gold. A legend shattered by greed. Now the Valley of the Kings lies ravaged by war, drained of its lifeblood as weak men inherit the cherished crown.

In the city of Thebes at the Festival of Osiris, loyal subjects of the Pharaoh gather to pay homage to their leader. But Taita - a wise and formidably gifted eunuch slave, sees him only as a symbol of a kingdom's fading glory. Beside Taita stand his proteges, Lostris, the beautiful fourteen-year-old daughter of his master Lord Intef; and Tanus, proud, young army officer, who has vowed to avenge the death - at Intef's hand - of his father, and seize Lostris as his prize. Together they share a dream - to restore the majesty of the Pharaoh of Pharaohs on the glittering banks of the Nile.

Wilbur Smith was born in Central Africa in 1933. He was educated at Michaelhouse and Rhodes University. He became a full-time writer in 1964 after the successful publication of When the Lion Feeds, and has since written over thirty novels, all meticulously researched on his numerous expeditions worldwide. In addition to his Egyptian novels, River God, The Seventh Scroll, Warlock and The Quest, his other titles include the successful The Courtneys and The Ballantynes series, Those in Peril and Vicious Circle, featuring security operative Hector Cross, and The Sunbird. His books are now translated into twenty-six languages.
GOR006174654
9781447267102
1447267109
River God by Wilbur Smith
Wilbur Smith
The Egyptian Novels
Used - Very Good
Paperback
Pan Macmillan
2014-09-11
688
N/A
Book picture is for illustrative purposes only, actual binding, cover or edition may vary.
This is a used book - there is no escaping the fact it has been read by someone else and it will show signs of wear and previous use. Overall we expect it to be in very good condition, but if you are not entirely satisfied please get in touch with us
Trustpilot