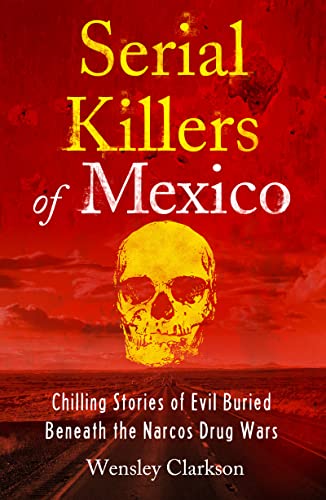 This book delves into Mexico's criminal underbelly to tell the stories of the psychopathic loners, professional narco assassins and the overwhelmed law enforcement trying desperately to hunt them down.

A collection of chilling stories of murders from Mexico, one of the world's most prolific hunting grounds for serial killers.

'If I was a serial killer looking for new victims, I'd head over the border to Mexico because life is cheap there and the police have got so much other sh*t to investigate, they don't bother with random killings.' - A former FBI agent

For decades, America has been considered to be the natural home of serial killers. Infamous names like Ted Bundy or Jeffrey Dahmer are internationally known and feared, and rightly so. But what if, just south of the border, there was a far more active network of serial killers? What if the perfect storm of crime, fuelled by this nation's deadly narco wars, has turned Mexico into an ideal hunting ground for many of the most bizarre and blood thirsty serial killers the world has ever seen?

Serial Killers of Mexico delves into this criminal underbelly to tell the stories of the psychopathic loners, professional narco assassins and the overwhelmed law enforcement trying desperately to hunt them down.

Wensley Clarkson's books have been published across the world and sold more than two million copies. He is also a prolific screenwriter, having written both movies and TV dramas, as well as worked on numerous television documentaries in the UK, US and Spain. He first covered crime as a national newspaper reporter thirty-five years ago and his numerous true-crime books include biographies of notorious criminals from across the globe.
GOR012389995
9781802791273
1802791272
Serial Killers of Mexico: Chilling Stories of Evil Buried Beneath the Narco Drug Wars by Wensley Clarkson
Wensley Clarkson
Used - Like New
Paperback
Welbeck Publishing Group
2022-06-23
320
N/A
Book picture is for illustrative purposes only, actual binding, cover or edition may vary.
The book has been read, but looks new. The book cover has no visible wear, and the dust jacket is included if applicable. No missing or damaged pages, no tears, possible very minimal creasing, no underlining or highlighting of text, and no writing in the margins
Trustpilot