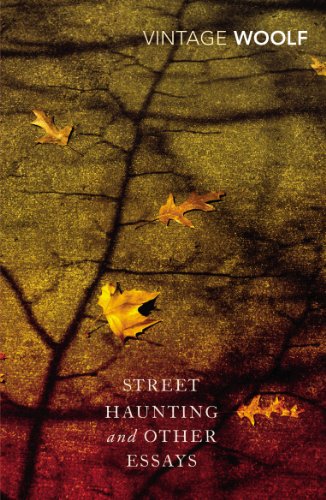 Street Haunting and Other Essays by Virginia Woolf

Virginia Woolf began writing reviews for the Guardian 'to make a few pence' from her father's death in 1904, and continued until the last decade of her life.

Street Haunting and Other Essays by Virginia Woolf

Virginia Woolf began writing reviews for the Guardian 'to make a few pence' from her father's death in 1904, and continued until the last decade of her life. The result is a phenomenal collection of articles, of which this selection offers a fascinating glimpse, which display the gifts of a dazzling social and literary critic as well as the development of a brilliant and influential novelist. From reflections on class and education, to slyly ironic reviews, musings on the lives of great men and 'Street Haunting', a superlative tour of her London neighbourhood, this is Woolf at her most thoughtful and entertaining.
Brilliant and subtle essays * Independent on Sunday *
It is all pure Woolf, so distinctive is her voice - ironic, cool, conversational and playful, shrewd and fantastical by turns * Literary Review *
Woolf was easily the greatest literary journalist of her age -- James Wood * Guardian *
More like novels than ordinary criticism * New Statesman *
Filled with comic spirit...there are some beautiful essays here...and many memorable ones -- Peter Ackroyd * New York Times *

Virginia Woolf was born in London in 1882, the daughter of Sir Leslie Stephen, first editor of The Dictionary of National Biography. After his death in 1904 Virginia and her sister, the painter Vanessa Bell, moved to Bloomsbury and became the centre of 'The Bloomsbury Group'. This informal collective of artists and writers which included Lytton Strachey and Roger Fry, exerted a powerful influence over early twentieth-century British culture.

In 1912 Virginia married Leonard Woolf, a writer and social reformer. Three years later, her first novel The Voyage Out was published, followed by Night and Day (1919) and Jacob's Room (1922). These first novels show the development of Virginia Woolf's distinctive and innovative narrative style. It was during this time that she and Leonard Woolf founded The Hogarth Press with the publication of the co-authored Two Stories in 1917, hand-printed in the dining room of their house in Surrey. Between 1925 and 1931 Virginia Woolf produced what are now regarded as her finest masterpieces, from Mrs Dalloway (1925) to the poetic and highly experimental novel The Waves (1931). She also maintained an astonishing output of literary criticism, short fiction, journalism and biography, including the playfully subversive Orlando (1928) and A Room of One's Own (1929) a passionate feminist essay. This intense creative productivity was often matched by periods of mental illness, from which she had suffered since her mother's death in 1895. On 28 March 1941, a few months before the publication of her final novel, Between the Acts, Virginia Woolf committed suicide.

GOR007939321
9780099589778
009958977X
Street Haunting and Other Essays by Virginia Woolf
Virginia Woolf
Used - Very Good
Paperback
Vintage Publishing
2014-10-02
272
N/A
Book picture is for illustrative purposes only, actual binding, cover or edition may vary.
This is a used book - there is no escaping the fact it has been read by someone else and it will show signs of wear and previous use. Overall we expect it to be in very good condition, but if you are not entirely satisfied please get in touch with us
Trustpilot