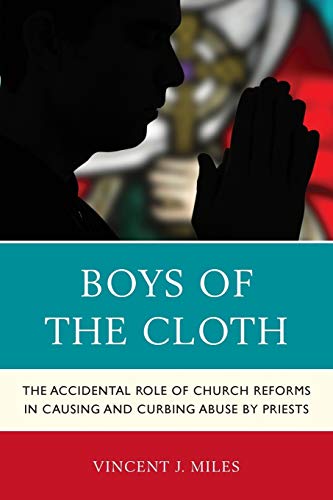 Boys of the Cloth by Vincent J. Miles

Boys of the Cloth presents a unique analysis of the sexual abuse crisis in the Catholic Church, combining a first-hand account of seminary life during the 1960s with a review of scientific knowledge about abusive behavior to reach contrarian conclusions about the crisis and its resolution.

Boys of the Cloth: The Accidental Role of Church Reforms in Causing and Curbing Abuse by Priests by Vincent J. Miles

Drawing on the author's unusual background as a seminarian turned scientist and business executive, Boys of the Cloth presents a unique analysis of the sexual abuse crisis in the Catholic Church. The book combines a first-hand account of seminary life during the 1960s-a period that turns out to be crucial for understanding the crisis-with explorations of the history of the seminary system, current scientific knowledge about abusive behavior, and the Church's own investigations into the "epidemic" of abuse by its priests. Through the interplay between these topics, two paradoxical conclusions emerge. First, that the epidemic was caused by an ancient reform intended to eradicate rather than encourage clerical corruption. Second, that it was reversed by modern Church policies with no obvious connection to sexual abuse. Boys of the Cloth will transform your understanding of predatory behavior by priests and of measures that will be crucial to prevent it.
Boys of the Cloth is invaluable for many reasons. It provides the clearest, most concise and most accurate analysis and explanation of the relationship between seminary formation and priests who sexually abuse minors that I have seen. The standard response from the official Catholic Church to questions about the connection between sexual violation of minors and adults, and mandatory celibacy, is that there is none. Those who have probed deeply into the phenomenon and understand the nature of the clerical sub-culture know full well that there is a direct connection, but one that is not as black and white as would be expected: being celibate does not cause a man to be obsessed with sex with children or adolescents. The connection is in the culture that forms and nurtures clerics, and in the isolated environments where seminarians are trained to go forth and help heal human wounds and provide moral and spiritual guidance for married and single men and women of all ages. Ironically the preparation for this heroic challenge was total isolation from normal society. Vincent Miles presents a profoundly insightful analysis of the role that minor seminaries and the strange culture they created played in the sexual abuse phenomenon. He should know. He was in one and since has had the brilliance and courage to delve deeply into his life and the years of his seminary experience to look at it all with almost rare objectivity. The book is an absolute must for anyone struggling to understand the bizarre and destructive phenomenon of sexual violence by clergy, and the cover up and enabling by the bishops, cardinals and popes. In addition, Vincent Miles provides a brilliant critique of the recent John Jay College study of the sex abuse issue, 'Causes and Context.' There are hundreds of books published about the Catholic clergy abuse issue. Many are very good. Some are mediocre. A few try to defend the institution and project the bishops' collective denial... and are a waste. Then there are a few that are foundational to understanding the length and breadth of this nightmare. This is one of them. -- Rev. Thomas Doyle, O.P., J.C.D, canon lawyer, advocate for victims of abuse by priests, and co-author of Sex, Priests, and Secret Codes: The Catholic Church's 2,000 Year Paper Trail of Sexual Abuse
Sexual abuse by priests continues to be a black mark on the Catholic church. Boys of the Cloth: The Accidental Role of Church Reforms in Causing and Curbing Abuse by Priests analyzes the politics and policies of the Catholic Church over hundreds of years and how it is strong impacting in both directions the corruption of the church. Vincent Miles focuses on the 1960s, but takes notes on the modern situation as well as history to present a vivid picture of scandal and why it is happening. Boys of the Cloth is a strong addition to social issues and religious studies collections, highly recommended. * Midwest Book Review *
A provocative contribution to the discussion about sexual abuse of children by priests, which raises many important points. -- David Finkelhor, director of the Crimes against Children Research Center, professor of sociology at the University of New Hampshire, and author of Sourcebook on Child Sexual Abuse
Based on careful research, and on what he calls his `strange semi-monastic existence... as a teenage Catholic seminarian during the 1960s,' Vincent J. Miles has penned a clear, well-written analysis of the sexual abuse epidemic within the Catholic priesthood. Miles deconstructs the simplistic view that explains away the epidemic as merely `a product of the Swinging Sixties,' and looks at deeper causes within the culture of the seminaries themselves. Boys of the Cloth is a valuable contribution to our understanding of the psychopathology of sexual abuse, written from an informed and humane perspective. -- Ronald Pies, Professor of Psychiatry
After spending much of his youth in Liverpool's Catholic seminary training for the priesthood, Vincent J. Miles embarked on a very different career path as a molecular biologist and biotechnology executive. He holds B.Sc. and Ph.D. degrees from University College London and is currently a venture capitalist in the Boston area.
Preface Acknowledgments 1. The Call of God-or My Mother? "Vocation," 1961-62 2. Schools for Scandal: The Role of Seminaries in the Abuse Crisis 3. A World Apart: Upholland College, 1962-63 4. Boys (and Men) of the Cloth: Four Centuries of the Seminary System 5. Tranquility, then Turmoil: Upholland College, 1963-65 6. Descent into Evil: How Priests Became Abusers 7. Changing Times: Upholland College, 1965-69 8. Swung by the Sixties? Understanding the Abuse Epidemic Bibliography Index
NPB9780761859741
9780761859741
0761859748
Boys of the Cloth: The Accidental Role of Church Reforms in Causing and Curbing Abuse by Priests by Vincent J. Miles
Vincent J. Miles
New
Paperback
University Press of America
2012-10-02
136
N/A
Book picture is for illustrative purposes only, actual binding, cover or edition may vary.
This is a new book - be the first to read this copy. With untouched pages and a perfect binding, your brand new copy is ready to be opened for the first time
Trustpilot