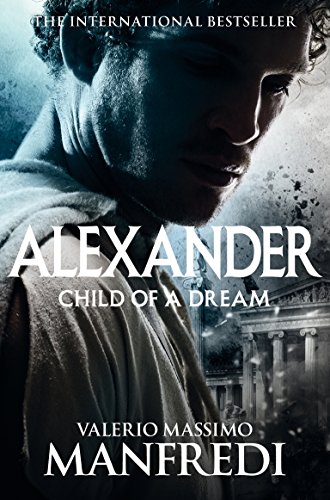 'And you, Alexander, sleepless in the dead of night:
Where do your eyes roam?
Where does your heart wander?
Yours is a quest for far off lands
Where the constellations set,
Where the last waves of an ocean die.'

A huge international bestseller, this is the first in Valerio Massimo Manfredi's outstanding trilogy of brutal passion and grand adventure in ancient Greece.

Who could have been born to conquer the world other than a god? A boy, born to a great king - Philip of Macedon - and his sensuous queen, Olympias. Shaped by the disciplines and passions of his parents' court, Alexander became a young man of immense, unfathomable potential. Under the tutelage of the famed Aristotle, and with the friendship of Ptolemy and revered tactician Hephaiston, he became the mightiest and most charismatic warrior, capable of subjugating the known world to his power.

Alexander: Child of a Dream is the magnificent story of one of history's greatest characters and his quest to conquer the civilized world.

Valerio Massimo Manfredi is an archaeologist and scholar of the ancient Greek and Roman world. He is the author of numerous novels, which have won him literary awards and have sold 12 million copies. His Alexander trilogy has been translated into thirty-eight languages and published in sixty-two countries and the film rights have been acquired by Universal Pictures. His novel The Last Legion was made into a film starring Colin Firth and Ben Kingsley and directed by Doug Lefler. Valerio Massimo Manfredi has taught at a number of prestigious universities in Italy and abroad and has published numerous articles and essays in academic journals. He has also written screenplays for film and television, contributed to journalistic articles and conducted cultural programmes and television documentaries. Iain Halliday was born in Scotland in 1960. He took a degree in American Studies at the University of Manchester and worked in Italy and London before moving to Sicily where he now lives. As well as working as a translator, he currently teaches English at the University of Catania.
GOR010934191
9781447271642
1447271645
Child of a Dream by Valerio Massimo Manfredi
Valerio Massimo Manfredi
Alexander
Used - Like New
Paperback
Pan Macmillan
2014-07-03
464
N/A
Book picture is for illustrative purposes only, actual binding, cover or edition may vary.
The book has been read, but looks new. The book cover has no visible wear, and the dust jacket is included if applicable. No missing or damaged pages, no tears, possible very minimal creasing, no underlining or highlighting of text, and no writing in the margins
Trustpilot