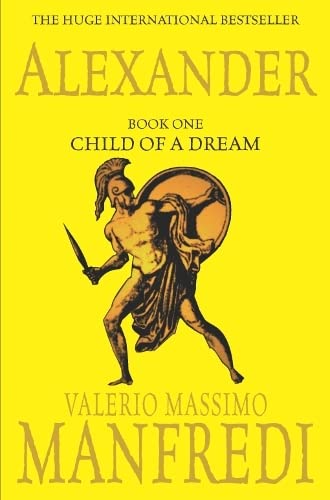 Who could have been born to conquer the world other than a god?

Mesmeric beauty, consuming desires, an insatiable hunger. Then premature death. This is the story of a boy, born to a great king - Philip of Macedon - and his sensuous queen, Olympias. It tells of the stern discipline of Philip and the wild passions of Olympias, and how, together, they formed Alexander, a young man of immense, unfathomable potential, capable of subjugating the known world to his power, and thought of by his contemporaries as a god.

Alexander's swift ascent to manhood, as a protege of Aristotle and close friend of Ptolemy and Hephiaston, and the start of his great adventure to conquer the civilised world is recounted in this awe-inspiring novel.

This is a wonderful evocation of the far-off and fascinating civilisation of ancient Greece, revealed in vibrant tones and scholarly detail.

Valerio Massimo Manfredi is an archaeologist and scholar of the ancient Greek and Roman world. He is the author of numerous novels, which have won him literary awards and have sold 12 million copies. His Alexander trilogy has been translated into thirty-eight languages and published in sixty-two countries and the film rights have been acquired by Universal Pictures. His novel The Last Legion was made into a film starring Colin Firth and Ben Kingsley and directed by Doug Lefler. Valerio Massimo Manfredi has taught at a number of prestigious universities in Italy and abroad and has published numerous articles and essays in academic journals. He has also written screenplays for film and television, contributed to journalistic articles and conducted cultural programmes and television documentaries. Iain Halliday was born in Scotland in 1960. He took a degree in American Studies at the University of Manchester and worked in Italy and London before moving to Sicily where he now lives. As well as working as a translator, he currently teaches English at the University of Catania.
GOR001269080
9780330399883
0330399888
Child of a Dream by Valerio Massimo Manfredi
Valerio Massimo Manfredi
Alexander
Used - Very Good
Paperback
Pan Macmillan
20060203
464
N/A
Book picture is for illustrative purposes only, actual binding, cover or edition may vary.
This is a used book - there is no escaping the fact it has been read by someone else and it will show signs of wear and previous use. Overall we expect it to be in very good condition, but if you are not entirely satisfied please get in touch with us
Trustpilot