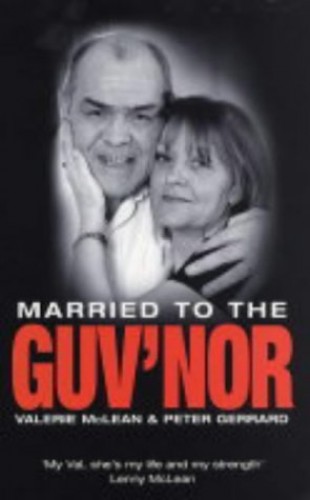 Married to the Guv'nor by Peter Gerrard

A gritty biography of legendary hard man Lenny McLean by his widow Valerie.

Married to the Guv'nor by Peter Gerrard

When his autobiography The Guv'nor was published it turned bareknuckle champion Lenny McLean into an unlikely cult hero. Lenny died shortly after his book came out, but that didn't stop it selling over 300,000 copies in hardback and popping up regularly on the Sunday Times best-seller list.

Lenny always said he had enough stories from his extraordinary life to fill another book - now Valerie takes up the pen on his behalf. Married to the Guv'nor is full of new and colourful incidents, from Lenny's first professional fight at a fairground to his winning match against the Mafia's best boxer, from the many crimes he got away with to his successful battle against a murder charge. Val also describes his acting career, which took him from a starring role in TV's The Knock to his famous part in Lock, Stock and Two Smoking Barrels. Told by the person who knew him best, this is a raw, funny and insightful biography of an unforgettable man.

'This highly readable memoir is informative, hilarious and full of fascinating insights into human nature' Daily Mail
Valerie McLean was married to Lenny for 29 years, until his early death. Peter Gerrard has written a number of best-selling autobiographies: The Guv'nor with Lenny McLean, Memoirs and Confessions with Ronnie Knight, and T'rific with Mike Reid.
GOR001820307
9780330493239
033049323X
Married to the Guv'nor by Peter Gerrard
Peter Gerrard
Used - Very Good
Paperback
Pan Macmillan
2004-03-19
320
N/A
Book picture is for illustrative purposes only, actual binding, cover or edition may vary.
This is a used book - there is no escaping the fact it has been read by someone else and it will show signs of wear and previous use. Overall we expect it to be in very good condition, but if you are not entirely satisfied please get in touch with us
Trustpilot