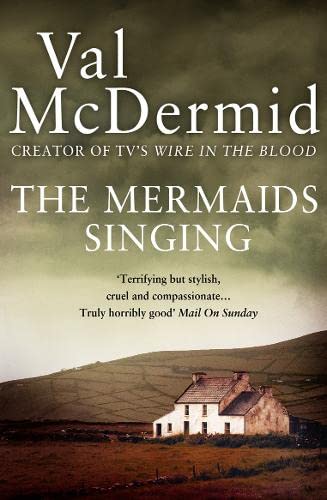 You always remember the first time. Isn't that what they say about sex? How much more true it is of murder...

Up till now, the only serial killers Tony Hill had encountered were safely behind bars. This one's different - this one's on the loose.

Four men have been found mutilated and tortured. As fear grips the city, the police turn to clinical psychologist Tony Hill for a profile of the killer. But soon Tony becomes the unsuspecting target in a battle of wits and wills where he has to use every ounce of his professional nerve to survive.

A tense, beautifully written psychological thriller, The Mermaids Singing explores the tormented mind of a serial killer unlike any the world of fiction has ever seen.

GOR001764472
9780007344673
0007344678
The Mermaids Singing (Tony Hill and Carol Jordan, Book 1) by Val McDermid
Val McDermid
Tony Hill and Carol Jordan
Used - Very Good
Paperback
HarperCollins Publishers
2010-03-04
400
N/A
Book picture is for illustrative purposes only, actual binding, cover or edition may vary.
This is a used book - there is no escaping the fact it has been read by someone else and it will show signs of wear and previous use. Overall we expect it to be in very good condition, but if you are not entirely satisfied please get in touch with us
Trustpilot