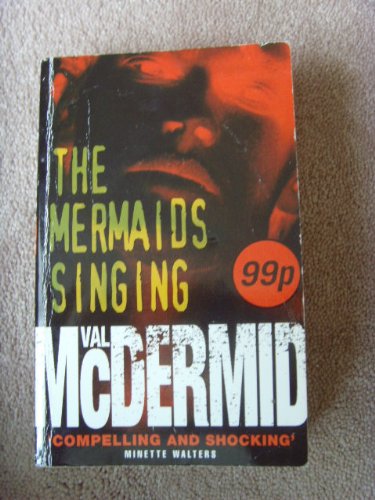 In the northern town of Bradfield four men have been found mutilated and tortured. Fear grips the city; no man feels safe. Clinical psychologist Tony HIll is brought in to profile the killer.

In the northern town of Bradfield four men have been found mutilated and tortured. Fear grips the city; not man feels safe. Clinical psychologist Tony HIll is brought in to profile the killer. A man with more than enought sexual problems of his own, Tony himself becomes the unsuspecting target in a battle of wits and wills where he has to use every ounce of his professional skill and personal nerve to survive.
Winner of the CWA's Gold Dagger Award for Best Crime Novel of the Year, The Mermaids Singing is a truly shocking psychological thriller and a startling departure from Val McDermid's Kate Branigan novels.

At Ottakars's, we believe Val McDermid is one of the best British crime writers at work today. Most writers are content to succeed in one style of crime fiction; Val McDermid has written novels in different styles and excels in all of them. From tense and disturbing to witty and fast-paced, her novels are all skilfully plotted and compelling.

We are confident that you will enjoy her books as much as we do and are offering this exclusive Ottakar's edition for only 99p* as an introduction. Luckliy, if you like this one, there are plenty more to read.

Val McDermid's new novel A Place of Execution is published in paperback on the 4th April and will be available at all Ottakar's branches at the special price of GBP4.99* (GBP2.00 off rrp). Her new hardback, Killing the Shadows, is published in June.

*Price applies for a limited period only and is subject to availability.

`Val McDermid is fiercely talented and woefully under read - she has been a hidden talent far too long'
Joanna Smith, Ottakar's Wakefield

`Val McDermid is one of the most versatile of today's crime writers. Read any of her superb books and you will be coming back for more'
June Davies, Ottakar's Staines

Val McDermid is a No. 1 bestseller whose novels have been translated into more than thirty languages, and have sold over eleven million copies. She has won many awards internationally, including the CWA Gold Dagger for best crime novel of the year, the LA Times Book of the Year Award and the CWA Cartier Diamond Dagger. She writes full time and divides her time between Cheshire and Edinburgh.
GOR004174233
9780007102273
0007102275
The Mermaids Singing (Tony Hill and Carol Jordan, Book 1) by Val McDermid
Val McDermid
Tony Hill and Carol Jordan
Used - Very Good
Paperback
HarperCollins Publishers
20000306
400
Winner of CWA Gold Dagger for Fiction 1995
Book picture is for illustrative purposes only, actual binding, cover or edition may vary.
This is a used book - there is no escaping the fact it has been read by someone else and it will show signs of wear and previous use. Overall we expect it to be in very good condition, but if you are not entirely satisfied please get in touch with us
Trustpilot