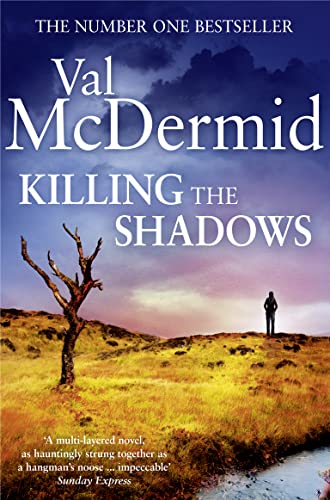 Killing the Shadows by Val McDermid

The Number One bestselling, award-winning Queen of crime fiction Val McDermid delivers a searing psychological suspense thriller. A serial killer is on the loose. His victims? Crime writers...

Killing the Shadows by Val McDermid

The Number One bestselling, award-winning Queen of crime fiction Val McDermid delivers a searing psychological suspense thriller. A serial killer is on the loose. His victims? Crime writers...

A murderer is at large, hunting with a bloodlust that shatters all the conventional wisdom on how serial killers operate.

Professor Fiona Cameron is a psychologist who uses computer technology to track serial offenders. She vowed never to work for the Met again after they went against her advice and screwed up an investigation as a result. But when her lover, thriller writer Kit Martin, tells her a fellow crime novelist has been murdered, Fiona can't help taking an interest.

With the killer striking again, Fiona is caught in a race against time, not only to save a life, but to bring herself redemption, both personal and professional.

'She is the real mistress of psychological gripping thrillers; no-one can plot or tell a story like she can. The hairs on my neck literally stood up' Express

'McDermid has become our leading pathologist of everyday evil... The subtle orchestration of terror is masterful' Guardian

GOR003334497
9780007344642
0007344643
Killing the Shadows by Val McDermid
Val McDermid
Used - Very Good
Paperback
HarperCollins Publishers
2010-03-04
624
N/A
Book picture is for illustrative purposes only, actual binding, cover or edition may vary.
This is a used book - there is no escaping the fact it has been read by someone else and it will show signs of wear and previous use. Overall we expect it to be in very good condition, but if you are not entirely satisfied please get in touch with us
Trustpilot