How the Dead Speak Val McDermid 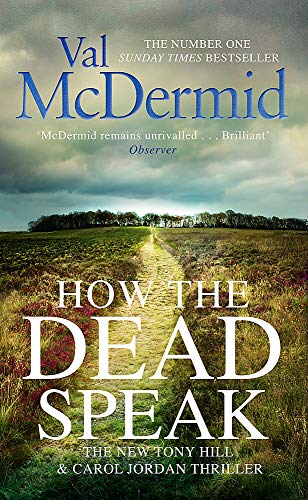 The next heart-pounding thriller from number one bestseller and queen of crime, Val McDermid

When human remains are discovered in the grounds of an old convent, it quickly becomes clear that someone has been using the site as their personal burial ground. But with the convent abandoned long ago and the remains dating back many years, could this be the work of more than one obsessive killer?

It's an investigation that throws up more questions as the evidence mounts, and after their last case ended catastrophically, Tony Hill and Carol Jordan can only watch from afar. As they deal with the consequences of previous actions, someone with a terrifying routine is biding their time - and both Tony and Carol find themselves closer to the edge than they have ever been before . . .

Electrifying and filled with masterful suspense, this is the most eagerly anticipated thriller yet from number one bestseller and queen of crime Val McDermid.

The ingenuity with which Val McDermid keeps her crime-fighting duo fresh is as captivating as her deftly plotted denouement * Scotland on Sunday *
McDermid's storytelling is as classy and compelling as ever * Observer *
This is McDermid on exemplary form, generating the requisite suspense but never forgetting that the characterisation of Hill and Jordan is a key ingredient * Financial Times *
'The queen of crime is still at the top of her game' * Independent *
Elegantly choreographed . . . McDermid fashions a finale which tees up the next thriller in this sequence admirably * The Scotsman *
Val McDermid is a number one bestseller whose novels have been translated into more than thirty languages, and have sold over sixteen million copies. She has won many awards internationally, including the CWA Gold Dagger for best crime novel of the year and the LA Times Book of the Year Award. She was inducted into the ITV3 Crime Thriller Awards Hall of Fame in 2009, was the recipient of the CWA Cartier Diamond Dagger in 2010 and received the Lambda Literary Foundation Pioneer Award in 2011. In 2016, Val received the Outstanding Contribution to Crime Fiction Award at the Theakstons Old Peculier Crime Writing Festival and in 2017 received the DIVA Literary Prize for Crime, and was elected a Fellow of both the Royal Society of Literature and the Royal Society of Edinburgh. Val has served as a judge for the Women's Prize for Fiction and the Man Booker Prize, and was Chair of the Wellcome Book Prize in 2017. She is the recipient of six honorary doctorates and is an Honorary Fellow of St Hilda's College, Oxford. She writes full-time and divides her time between Edinburgh and East Neuk of Fife.
GOR010082341
9781408712269
1408712261
How the Dead Speak by Val McDermid
Val McDermid
Tony Hill and Carol Jordan
Used - Very Good
Paperback
Little, Brown Book Group
2019-08-01
416
N/A
Book picture is for illustrative purposes only, actual binding, cover or edition may vary.
This is a used book - there is no escaping the fact it has been read by someone else and it will show signs of wear and previous use. Overall we expect it to be in very good condition, but if you are not entirely satisfied please get in touch with us
Trustpilot