Fever Of The Bone Val McDermid 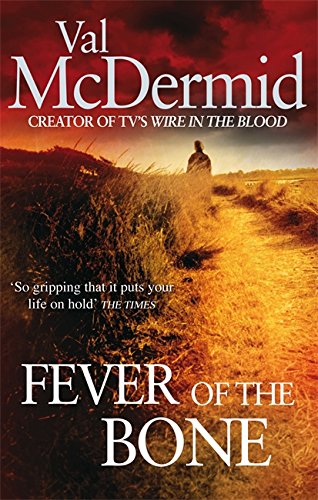 Fever Of The Bone by Val McDermid

Fever Of The Bone by Val McDermid

'No-one can plot or tell a story like she can. The hairs on my neck literally stood up' Daily Express
'So gripping it puts your life on hold' The Times

'You should have been a detective. If there's one thing the last year has proved, it's how good you are at finding things out. Things that are buried so deep nobody even thinks twice about them. The sort of things that turn people's lives inside out once they're exposed.'

Meet Tony Hill's most twisted adversary - a killer with a shopping list of victims, a killer unmoved by youth and innocence, a killer driven by the most perverted of desires.

The murder and mutilation of teenager Jennifer Maidment is horrific enough on its own. But it's not long before Tony realises it's just the start of a brutal and ruthless campaign that's targeting an apparently unconnected group of young people.

Struggling with the newly awakened ghosts of his own past and desperate for distraction in his work, Tony battles to find the answers that will give him personal and professional satisfaction in his most testing investigation yet . . .

The sixth book in the Tony Hill and Carol Jordan series, from No. 1 bestselling author Val McDermid

So gripping that it puts your life on hold. * The Times *
She is the real mistress of psychological gripping thrillers; no-one can plot or tell a story like she can. The hairs on my neck literally stood up. * Jenni Murray, Daily Express *
McDermid remains unrivalled at yoking chilling scenarios to a pulsing narrative; and Hill's torment is palpable in this scary, dark thriller. Brilliant * Observer *
Everything a great detective novel should be: pacy, gripping, clever and stylish and, most of all, a fantastic read. * Sunday Express *
Another cracker in the Tony Hill and Carol Jordan series from the most imaginative creator of serial killers we have. * Daily Mail *
Gripping, well-written, nail-biting stuff * Waterstone's Books Quarterly *
One of our finest crime writers. * The Times *
A moving novel, not just a gripping one. * Financial Times *
As good a psychological thriller as it is possible to get. * Sunday Express *
McDermid's mastery of this genre is evident, particularly in her dialogue, in which there is rarely a false note. * TLS *
McDermid's books are getting better and better...an absorbing novel of character. * Literary Review *
...reminds us just how finely plotted and intelligently written McDermid's novels are. More please - and soon. * Irish Times *
Val McDermid is a number one bestseller whose novels have been translated into more than thirty languages, and have sold over sixteen million copies. She has won many awards internationally, including the CWA Gold Dagger for best crime novel of the year and the LA Times Book of the Year Award. She was inducted into the ITV3 Crime Thriller Awards Hall of Fame in 2009, was the recipient of the CWA Cartier Diamond Dagger in 2010 and received the Lambda Literary Foundation Pioneer Award in 2011. In 2016, Val received the Outstanding Contribution to Crime Fiction Award at the Theakstons Old Peculier Crime Writing Festival and in 2017 received the DIVA Literary Prize for Crime, and was elected a Fellow of both the Royal Society of Literature and the Royal Society of Edinburgh. Val has served as a judge for the Women's Prize for Fiction and the Man Booker Prize, and was Chair of the Wellcome Book Prize in 2017. She is the recipient of six honorary doctorates and is an Honorary Fellow of St Hilda's College, Oxford. She writes full-time and divides her time between Edinburgh and East Neuk of Fife.
GOR001582457
9780751543216
0751543217
Fever Of The Bone by Val McDermid
Val McDermid
Tony Hill and Carol Jordan
Used - Very Good
Paperback
Little, Brown Book Group
2010-02-18
512
Long-listed for Theakston's Old Peculier Crime Novel of the Year 2011 (UK)
Book picture is for illustrative purposes only, actual binding, cover or edition may vary.
This is a used book - there is no escaping the fact it has been read by someone else and it will show signs of wear and previous use. Overall we expect it to be in very good condition, but if you are not entirely satisfied please get in touch with us
Trustpilot