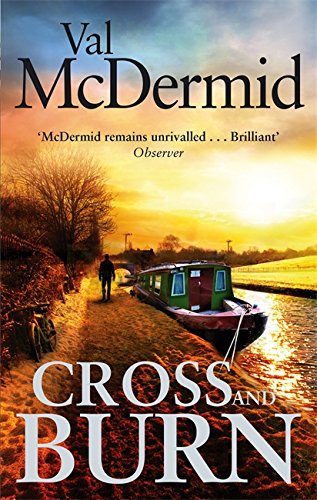 Cross and Burn by Val McDermid

Breathless, gripping and thrilling - the Queen of the Psychological Thriller is back with her eighth spine-chilling novel in the Tony Hill & Carol Jordan series

Cross and Burn by Val McDermid

Someone is brutally killing women. Women who bear a striking resemblance to former DCI Carol Jordan. The connection is too strong to ignore and soon psychological profiler Tony Hill finds himself dangerously close to the investigation, just as the killer is closing in on his next target.

This is a killer like no other, hell-bent on inflicting the most severe and grotesque punishment on his prey. As the case becomes ever-more complex and boundaries begin to blur, Tony and Carol must work together once more to try and save the victims, and themselves.

Breathless, gripping and thrilling - the Queen of the Psychological Thriller is back with her most spine-chilling novel to date.
__________________

The eighth book in the Tony Hill and Carol Jordan series, from No. 1 bestselling author Val McDermid

Dark, tense and pacy, McDermid's fans will love this * Irish Sunday Mirror *
McDermid is as smooth a practitioner of crime fiction as anyone out there * New York Times Book Review *
McDermid earns her customary high marks for planting clues, mastering procedural detail and maintaining suspense as the net closes. As usual, however, the endlessly fraught relationships among the continuing characters are the real draw. * Kirkus Reviews *
McDermid's fiendishly clever eighth novel featuring forensic psychologist Tony Hill and detective Carol Jordan... is not to be missed * Publisher's Weekly *
The book can be read as a story about a hunter/ killer. But it is also a fascinating study of his opponents, the infinitely complex Hill and the clever Sleuth Jordan * Literary Review *
Val McDermid is a number one bestseller whose novels have been translated into more than thirty languages, and have sold over sixteen million copies. She has won many awards internationally, including the CWA Gold Dagger for best crime novel of the year and the LA Times Book of the Year Award. She was inducted into the ITV3 Crime Thriller Awards Hall of Fame in 2009, was the recipient of the CWA Cartier Diamond Dagger in 2010 and received the Lambda Literary Foundation Pioneer Award in 2011. In 2016, Val received the Outstanding Contribution to Crime Fiction Award at the Theakstons Old Peculier Crime Writing Festival and in 2017 received the DIVA Literary Prize for Crime, and was elected a Fellow of both the Royal Society of Literature and the Royal Society of Edinburgh. Val has served as a judge for the Women's Prize for Fiction and the Man Booker Prize, and was Chair of the Wellcome Book Prize in 2017. She is the recipient of six honorary doctorates and is an Honorary Fellow of St Hilda's College, Oxford. She writes full-time and divides her time between Edinburgh and East Neuk of Fife.
GOR005510909
9780751551273
0751551279
Cross and Burn by Val McDermid
Val McDermid
Tony Hill and Carol Jordan
Used - Very Good
Paperback
Little, Brown Book Group
2014-02-25
496
Short-listed for CrimeFest e-Dunnit Awards 2014 (UK)
Book picture is for illustrative purposes only, actual binding, cover or edition may vary.
This is a used book - there is no escaping the fact it has been read by someone else and it will show signs of wear and previous use. Overall we expect it to be in very good condition, but if you are not entirely satisfied please get in touch with us
Trustpilot