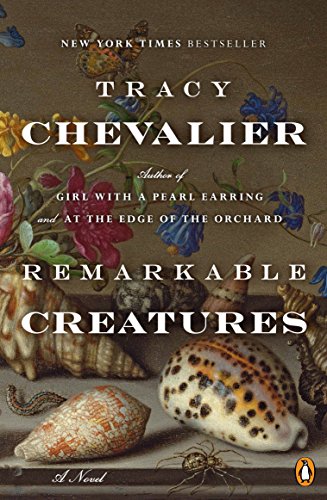 When Mary Anning uncovers an unusual fossilized skeleton near her English coast home, she sets the community on edge. Mary soon finds a champion in prickly Elizabeth Philpot. Their relationship strikes a delicate balance between fierce loyalty, mutual appreciation, and barely suppressed envy.

A voyage of discovery, two remarkable women, and an extraordinary time and place enrich this New York Times bestselling novel by Tracy Chevalier, author of At the Edge of the Orchard and Girl With a Pearl Earring.

On the windswept, fossil-strewn beaches of the English coast, poor and uneducated Mary Anning learns that she has a unique gift: "the eye" to spot fossils no one else can see. When she uncovers an unusual fossilized skeleton in the cliffs near her home, she sets the religious community on edge, the townspeople to gossip, and the scientific world alight. After enduring bitter cold, thunderstorms, and landslips, her challenges only grow when she falls in love with an impossible man.

Mary soon finds an unlikely champion in prickly Elizabeth Philpot, a middle-class spinster who shares her passion for scouring the beaches. Their relationship strikes a delicate balance between fierce loyalty, mutual appreciation, and barely suppressed envy, but ultimately turns out to be their greatest asset.

"Absorbing...[Chevalier] creates a world reminiscent of a Vermeer interior: suspended in a particular moment, it transcends its time and place."
--The New Yorker (on Girl With a Pearl Earring)

"I was born and grew up in Washington, DC. After getting a BA in English from Oberlin College (Ohio), I moved to London, England in 1984. I intended to stay 6 months; I'm still here.

"As a kid I'd often said I wanted to be a writer because I loved books and wanted to be associated with them. I wrote the odd story in high school, but it was only in my twenties that I started writing 'real' stories, at night and on weekends. Sometimes I wrote a story in a couple evenings; other times it took me a whole year to complete one.

"Once I took a night class in creative writing, and a story I'd written for it was published in a London-based magazine called Fiction. I was thrilled, even though the magazine folded 4 months later.

I worked as a reference book editor for several years until 1993 when I left my job and did a year-long MA in creative writing at the University of East Anglia in Norwich (England). My tutors were the English novelists Malcolm Bradbury and Rose Tremain. For the first time in my life I was expected to write every day, and I found I liked it. I also finally had an idea I considered 'big' enough to fill a novel. I began The Virgin Blue during that year, and continued it once the course was over, juggling writing with freelance editing.

"An agent is essential to getting published. I found my agent Jonny Geller through dumb luck and good timing. A friend from the MA course had just signed on with him and I sent my manuscript of The Virgin Blue mentioning my friend's name. Jonny was just starting as an agent and needed me as much as I needed him. Since then he's become a highly respected agent in the UK and I've gone along for the ride."

GOR007349922
9780452296725
0452296722
Remarkable Creatures by Tracy Chevalier
Tracy Chevalier
Used - Very Good
Paperback
Unknown
0
N/A
Book picture is for illustrative purposes only, actual binding, cover or edition may vary.
This is a used book - there is no escaping the fact it has been read by someone else and it will show signs of wear and previous use. Overall we expect it to be in very good condition, but if you are not entirely satisfied please get in touch with us
Trustpilot