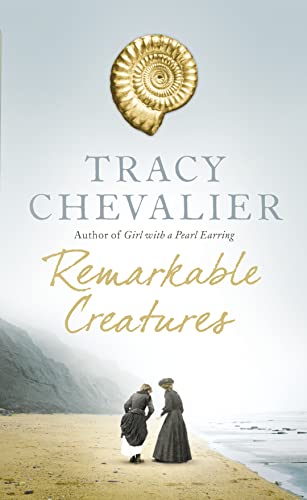 In the year of the 150th anniversary of Origin of the Species, set in a town where Jane Austen was a frequent visitor, Tracy Chevalier once again shows her uncanny sense for the topical.

In the year of the 150th anniversary of Origin of the Species, set in a town where Jane Austen was a frequent visitor, Tracy Chevalier once again shows her uncanny sense for the topical.

In the early nineteenth century, a windswept beach along the English coast brims with fossils for those with the eye...

From the moment she's struck by lightning as a baby, it is clear Mary Anning is marked for greatness. When she uncovers unknown dinosaur fossils in the cliffs near her home, she sets the scientific world alight, challenging ideas about the world's creation and stimulating debate over our origins. In an arena dominated by men, however, Mary is soon reduced to a serving role, facing prejudice from the academic community, vicious gossip from neighbours, and the heartbreak of forbidden love. Even nature is a threat, throwing bitter cold, storms, and landslips at her.

Luckily Mary finds an unlikely champion in prickly, intelligent Elizabeth Philpot, a middle-class spinster who is also fossil-obsessed. Their relationship strikes a delicate balance between fierce loyalty and barely suppressed envy. Despite their differences in age and background, Mary and Elizabeth discover that, in struggling for recognition, friendship is their strongest weapon.

Remarkable Creatures is Tracy Chevalier's stunning new novel of how one woman's gift transcends class and gender to lead to some of the most important discoveries of the nineteenth century. Above all, it is a revealing portrait of the intricate and resilient nature of female friendship.

'It is a stunning story, compassionately reimagined'
Guardian

'Chevalier recently stated that making fossils sexy was one of her chief aims in writing Remarkable Creatures. With this very entertaining book, she has certainly succeeded'
Telegraph

'Very entertaining and informative'
The Times

'An enthralling novel of female friendship and fossil hunting.'
Woman and Home

'Involving themes of friendship and the hidden world of women as much as the excitement of discovering the fossils' significance, Remarkable Creatures is itself a find'
Metro

Tracy Chevalier is the author of five previous novels, including the international bestseller Girl with a Pearl Earring, The Virgin Blue, Falling Angels, The Lady and the Unicorn and Burning Bright. Born in Washington, DC, she moved in 1984 to London, where she lives with her husband and son. She is Chairman of the Society of Authors and has a website at www.tchevalier.com

GOR001906942
9780007237227
0007237227
Remarkable Creatures by Tracy Chevalier
Tracy Chevalier
Used - Very Good
Paperback
HarperCollins Publishers
2009-11-01
352
N/A
Book picture is for illustrative purposes only, actual binding, cover or edition may vary.
This is a used book - there is no escaping the fact it has been read by someone else and it will show signs of wear and previous use. Overall we expect it to be in very good condition, but if you are not entirely satisfied please get in touch with us
Trustpilot