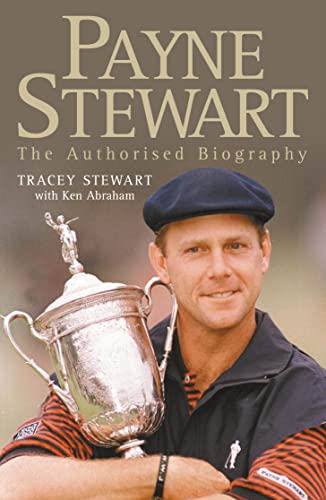 Written by his wife Tracey Stewart, this is the only authorized biography of Payne Stewart. It gives the reader a detailed look into Payne's life through the eyes of the person closest to him throughout all the triumphs and disasters of his career.

Written by his wife Tracey Stewart, this is the only authorized biography of Payne Stewart. It gives the reader a detailed look into Payne's life through the eyes of the person closest to him throughout all the triumphs and disasters of his career.

When his life came to a sudden and tragic end in Ocotber 1999, Payne Stewart was at the top of his game on every level. In June 1999 he secured his place as one of the golfing greats of our time when he putted out for victory in the US open and won a much coveted place on the winning Ryder Cup team.

This is a book about a man unique in his talent, faith and commitment to his family. Many of the sports greatest characters can be found in its pages and it paints a compelling picture of life on the PGA circuit

While this biography charts his professional accomlishments it is also a testimony of his personal triumphs.

Those closest to Stewart said his family and faith were what mattered most to him. At his funeral his wife Tracey described him as a devoted husband, father and a devout Christian. She said After 18 years of marriage, he was still the most beautiful man I had ever seen, because of what he was on the inside.

Tracey Stewart was born in Rockhampton, Australia and attended school in Queensland. She married Payne Stewart in 1981and lives in Orlando, Florida with their two children, Chelsea(14) and Aaron(10).

Ken Abraham is the author of over forty books. He collaborated with professional golfer Paul Azinger on ZINGER! and lives in Franklin, Tennessee.

GOR000975543
9780007109975
0007109970
Payne Stewart: The Authorised Biography by Tracey Stewart
Tracey Stewart
Used - Very Good
Paperback
HarperCollins Publishers
20010604
336
N/A
Book picture is for illustrative purposes only, actual binding, cover or edition may vary.
This is a used book - there is no escaping the fact it has been read by someone else and it will show signs of wear and previous use. Overall we expect it to be in very good condition, but if you are not entirely satisfied please get in touch with us
Trustpilot