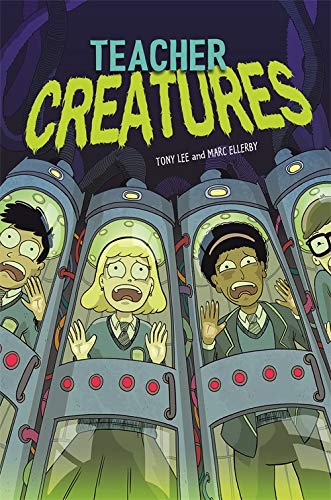 Asif and Nasir are starting their first day at a new school, but the teachers seem a bit ... alien

Asif and Nasir are starting their first day at a new school. The lessons seem okay, and the students are pretty harmless. It's just the teachers, they seem a bit ... alien. Asif and Nasir team up with Brainy and Evil Vikki to find out what on Earth is going on ...

Tony Lee (Author)
A New York Times Best-selling Graphic Novelist, Tony Lee was born in West London, UK in 1970. Informed by a teacher that he had a comic book style of writing, (a comment meant more as an insult), Tony decided that one day he would write for comics.

Tony has written for a variety of mediums including Radio 4, The BBC, commerical television in both the UK and US, magazines and both local and national newspapers.

Since 2002, he has written for a variety of publishers including Marvel Comics, DC Comics/Zuda, Games Workshop, Panini Comics, Titan Publishing, AAM/Markosia Enterprises, Rebellion/2000ad and IDW Publishing amongst others, writing a variety of creator owned titles and licenses that include X-Men, Spider Man, Doctor Who, Starship Troopers, Wallace & Gromit and Shrek.

He is the writer of the ongoing Doctor Who series of comics from IDW, beginning in July 2009, and his award nominated, creator-owned miniseries Hope Falls was collected by AAM/Markosia in May 2009. His next book with them, From The Pages Of Bram Stoker's 'Dracula': Harker, was released in November 2009 to critical acclaim.

Added to this, Tony adapted Pride & Prejudice & Zombies into a graphic novel for Del Rey Publishing, with art by Cliff Richards - this was a New York Times #1 Bestselling Paperback Graphic Novel for May 2010 - he is also adapting Anthony Horowitz's Power of Five series into graphic format for Walker Books, the first - Raven's Gate is due out in late 2010, and he has adapted four Horowitz Horror books with Dan Boultwood for Hachette Children's Books.

His other book with Walker Books, Outlaw: The Legend Of Robin Hood (drawn by Sam Hart) was released in 2009 and has already been awarded a Junior Library Guild: Fall 2009 Selection, and 'best for 2010' awards from both the American Library Association and the New York Public Library in the USA, among others. In March 2010 it was announced that it was also a finalist for the Children's Choice Book Awards.

GOR012113982
9781445157177
1445157179
EDGE: Bandit Graphics: Teacher Creatures by Tony Lee
Tony Lee
EDGE: Bandit Graphics
Used - Very Good
Hardback
Hachette Children's Group
2018-06-28
32
N/A
Book picture is for illustrative purposes only, actual binding, cover or edition may vary.
This is a used book - there is no escaping the fact it has been read by someone else and it will show signs of wear and previous use. Overall we expect it to be in very good condition, but if you are not entirely satisfied please get in touch with us
Trustpilot