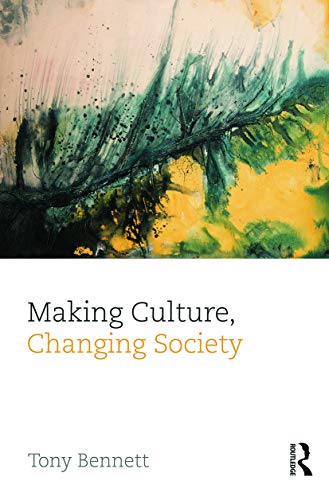 Making Culture, Changing Society proposes a challenging new account of the relations between culture and society focused on how particular forms of cultural knowledge and expertise work on, order and transform society. Examining these forms of culture's action on the social as aspects of a historically distinctive ensemble of cultural institutions, it considers the diverse ways in which culture has been produced and mobilised as a resource for governing populations.

These concerns are illustrated in detailed case studies of how anthropological conceptions of the relations between race and culture have shaped - and been shaped by - the relationships between museums, fieldwork and governmental programmes in early twentieth-century France and Australia. These are complemented by a closely argued account of the relations between aesthetics and governance that, in contrast to conventional approaches, interprets the historical emergence of the autonomy of the aesthetic as vastly expanding the range of art's social uses.

In pursuing these concerns, particular attention is given to the role that the cultural disciplines have played in making up and distributing the freedoms through which modern forms of liberal government operate. An examination of the place that has been accorded habit as a route into the regulation of conduct within liberal social, cultural and political thought brings these questions into sharp focus. The book will be of interest to students and scholars of sociology, cultural studies, media studies, anthropology, museum and heritage studies, history, art history and cultural policy studies.

"Tony Bennett (of the University of Western Sydney, Australia) is recognized in the Anglo-Saxon academic world for his work in cultural studies and museology; it has also helped to disseminate the work of Pierre Bourdieu in the UK. For his twelfth book, Tony Bennett collects and increases some texts published here and there in elegantly combining the French and British contributions in cultural sociology, ethnography, cultural studies and social theory; it is precisely this rare theoretical diversity that makes his work particularly interesting." - Yves Laberge, Recherches sociologiques et anthropologiques, Quebec
Tony Bennett is Research Professor in Social and Cultural Theory in the Institute for Culture and Society at the University of Western Sydney. His work has had a defining influence on contemporary debates in cultural studies and cultural sociology. Making Culture, Changing Society builds on and extends his distinctive perspective on the relations between culture and society developed in his The Birth of the Museum; Culture: A Reformer's Science; and Pasts Beyond Memory.
Introduction. Part I: Culture: Veridical, Material, and Compositional Perspectives 1. After Culture? 2. Making Culture, Organising Freedom, Changing Society 3. Civic Laboratories: Museums, Cultural Objecthood, and the Governance of the Social Part II: Anthropological Assemblages Inter-text 1 4. Making and Mobilising Worlds: Assembling and Governing the Other 5. Collecting, Instructing, Governing: Fields, Publics, Milieus Part III: Governing through Freedom: Aesthetics and Liberal Governance Inter-text 2 6. The Uses of Uselessness: Aesthetics, Freedom, Government 7. Guided Freedom: Aesthetics, Tutelage and the Interpretation of Art Part IV: Habit and the Architecture of the Person Inter-text 3 8. Habit, Instinct, Survivals: Repetition, History, Biopower 9. Habitus/Habit: Freedom/History. Afterword. References
NLS9780415738491
9780415738491
0415738490
Making Culture, Changing Society by Tony Bennett (University of Western Sydney, Australia)
Tony Bennett (University of Western Sydney, Australia)
New
Paperback
Taylor & Francis Ltd
2013-11-11
18
N/A
Book picture is for illustrative purposes only, actual binding, cover or edition may vary.
This is a new book - be the first to read this copy. With untouched pages and a perfect binding, your brand new copy is ready to be opened for the first time
Trustpilot