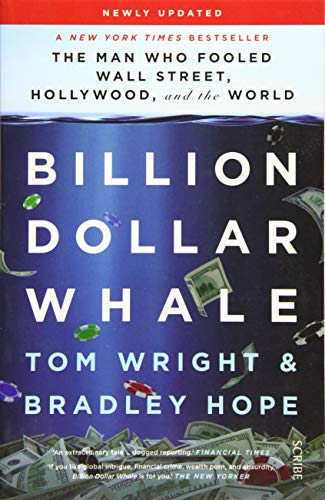 Billion Dollar Whale: the bestselling investigation into the financial fraud of the century by Tom Wright

A BOOK OF THE YEAR FOR THE FINANCIAL TIMES AND FORTUNE MAGAZINE.

The epic story of how a young social climber from Malaysia pulled off one of the biggest financial heists in history.

In 2015, rumours began circulating that billions of dollars had been stolen from a Malaysian investment fund. The mastermind of the heist was twenty-seven-year-old Jho Low, a serial fabulist from an upper-middle-class Malaysian family, who had carefully built his reputation as a member of the jet-setting elite by arranging and financing elaborate parties for Wall Street bankers, celebrities, and even royalty.

With the aid of Goldman Sachs and others, Low stole billions of dollars, right under the nose of global financial industry watchdogs. He used the money to finance elections, purchase luxury real estate, throw champagne-drenched parties, and bankroll Hollywood films like The Wolf of Wall Street.

Billion Dollar Whale reveals how this silver-tongued con man, a 'modern Gatsby', emerged from obscurity to pull off one of the most audacious financial heists the world has ever seen, and how the financial industry let him. It is a classic harrowing parable of hubris and greed in the financial world.

'An extraordinary tale ... richly woven ... with dogged reporting ... Like all good business stories, Billion Dollar Whale is bigger than the immediate one it tells. It is a story of emerging markets crippled by corruption and cronyism and comes from the era of egregious - and mostly punishment-free - banking ... One thing is clear. If ever Hollywood gets round to telling the story on screen, here is perfect material for the script.'

'As Bad Blood is to biotech, Billion Dollar Whale is to international finance ... a wonderful read ... Thrilling.'

'One of the best business books in a long time.'

'What a blast to read! A true life thriller that reads like a Hollywood movie, Billion Dollar Whale traces the exploits of the most mercurial, mysterious big player in history. Jho Low is Gatsby with twice the bank account and ten times the ambition, and the stories surrounding his exploits leap right off the page!'

* Ben Mezrich, New York Times bestselling author of The Accidental Billionaires and Bringing Down The House *

'Wright and Hope deliver a scintillating and prodigiously reported tale of a globe-spanning modern Gatsby and his audacious fraud.'

* Jesse Eisinger, Pulitzer Prize-winning reporter for ProPublica and author of The Chickenshit Club *

'This story of a Wharton graduate who carried out the $5 billion swindle known as 1MDB offers a textbook case of financial fraud in the modern age.'

'An incredible story ... If you need some billionaires to despise-look no further than these charlatans.'

'Even the most skilled fiction writer would have trouble conjuring the corrupt and colorful protagonist of Billion Dollar Whale. Bradley Hope and Tom Wright's gripping portrait of Jho Low and his enablers throughout the global financial system will both fascinate and enrage you.'

'The story of a massive international financial scandal ... As the authors amply prove, the scandal reaches far beyond Low. To succeed, he relied on the naivete, greed, and generally immoral conduct of huge banks as well as corrupt governments.'

'Wright and Hope transform their investigation of a mind-boggling financial fraud into a nonfiction thriller ... This is an epic tale of white-collar crime on a global scale.' STARRED REVIEW

'An amazing tale of greed ... juicy and entertaining.' STARRED REVIEW

'Well-researched and well-documented ... Reveals how Low used a bag of tricks, including financial fraud, to make himself seem more powerful, more influential, and more successful than he actually was ... This is a must-read.'

'Billion Dollar Whale does more than dissect a financial fraud of epic proportions; it takes the reader on a fascinating journey inside the heart of a con that was years in the making. Wright and Hope show how perception becomes reality in the hands of a consummate financial illusionist. Billion Dollar Whale proves once again that truth is stranger than fiction.'

'The authors strike a good balance between keeping Low's story at the centre and making it clear that 1MDB was a scandal waiting to happen ... they also provide some telling anecdotes.'

'Gripping ... The heist of the century.'

'A wonderful book ... A rip-roaring, absolutely delightful account of one of the biggest financial cons in the history of the world ... If you liked Bad Blood, you might well enjoy Billion Dollar Whale ... An incredible story of a con artist at the height of his game.'

'Just finished reading Billion Dollar Whale and was blown away. I thought I had seen it all with Russian kleptocracy, but the story of the money stolen in Malaysia in 1MDB and all the enthusiastic Western enablers was unbelievable.'

-- Bill Browder, #1 New York Times bestselling author of Red Notice
Tom Wright was one of the first journalists to arrive at the scene of the raid in which Navy SEALs killed Osama bin Laden. In 2013, he spearheaded coverage of the collapse of the Rana Plaza factory in Bangladesh, which killed over 1,000 people, earning the Wall Street Journal a Sigma Delta Chi award from The Society of Professional Journalists. He is a Pulitzer finalist, a Loeb winner, and has garnered numerous awards from the Society of Publishers in Asia, which in 2016 named him 'Journalist of the Year'. He speaks English, Malay, French, and Italian. Bradley Hope has worked for the Wall Street Journal for the last four years, covering finance and malfeasance from New York City and London. Before that, he spent six years as a correspondent in the Middle East, where he covered the Arab Spring uprisings from Cairo, Tripoli, Tunis, and Beirut. He was detained by authorities in Bahrain, reported from the front lines of the Libyan civil war, and has been teargassed in raucous Egyptian protests. Bradley is a Pulitzer finalist and a Loeb winner, and also author of Last Days of the Pharaoh, a chronicle of the final days and hours of the presidency of Hosni Mubarak.
GOR010094994
9781912854547
1912854546
Billion Dollar Whale: the bestselling investigation into the financial fraud of the century by Tom Wright
Tom Wright
Used - Very Good
Paperback
Scribe Publications
2019-09-12
416
N/A
Book picture is for illustrative purposes only, actual binding, cover or edition may vary.
This is a used book - there is no escaping the fact it has been read by someone else and it will show signs of wear and previous use. Overall we expect it to be in very good condition, but if you are not entirely satisfied please get in touch with us
Trustpilot