Don't Ask Me About My Dad Tom Mitchelson 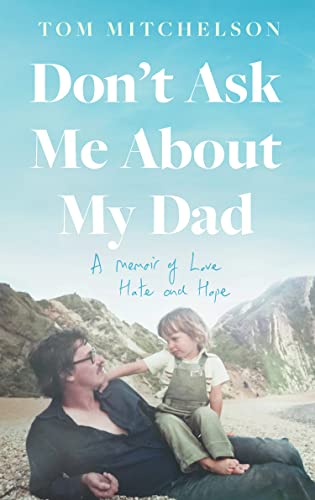 Don't Ask Me About My Dad by Tom Mitchelson

Growing up with him was like being in my own war zone, living in perpetual fear of when the bombs would fall.

Don't Ask Me About My Dad: A Memoir of Love, Hate and Hope by Tom Mitchelson

Growing up with him was like being in my own war zone, living in perpetual fear of when the bombs would fall.

I was terrified of becoming him, and in moments I could feel I might. He still lives within me grimly like some battered demon spright. And I'm fearful of his shadow. The rage, and his blood. There are some moments when he arrives and I want to tear up the whole world with my bare hands, and all I really want is love. I want him away now. Please. Just go.

In this extraordinary memoir, Tom Mitchelson offers a deeply moving story of hope and love triumphing over adversity. It is gripping account of what it's like for a child to grow up in an explosively violent home and explores the enormously complicated relationship Tom had with his dad, well into adulthood.

Tom grew up with identical triplet sisters and they would watch as their dad would abuse their mum, shouting obscenities in her face, brutally drag her around the house and inflict other unspeakable cruelties. It went on for years and the family never told a soul.

Tom knew his dad was a monster, yet he loved him. He was both friend and foe. Someone to fear and at the same time someone Tom felt he had to defend. When Tom became the protegee of his comprehensive school teacher, that story too turned dark.

Tom followed a career in comedy and undercover journalism and it was only after his father's death, and becoming a father himself, that he could begin to face up to his past, leading him on a powerful journey of self-discovery.

Don't Ask Me About My Dad is an inspirational story of our time: a rare account by someone from a deprived background speaking about the complexities of a defining relationship and finding the restorative power of fatherhood, resilience and, ultimately, how the truth can set you free.

Tom Mitchelson started out as the principal writer on BBC Radio 5's, The Treatment, providing political and showbiz comedy sketches for Rob Brydon. He contributed to numerous BBC Radio 2 and 4 shows over the years, including The Griff Rhys Jones Show and the weekly topical monologue on Loose Ends. He's written two sitcoms on Radio 4 and been a joke writer on prime-time ITV shows. His investigative and immersive journalism has appeared in The Times, The Daily Mail, The Guardian and The Sun. He recently gave his first Ted Talk.

NGR9780008491413
9780008491413
0008491410
Don't Ask Me About My Dad: A Memoir of Love, Hate and Hope by Tom Mitchelson
Tom Mitchelson
New
Hardback
HarperCollins Publishers
2022-03-31
304
N/A
Book picture is for illustrative purposes only, actual binding, cover or edition may vary.
This is a new book - be the first to read this copy. With untouched pages and a perfect binding, your brand new copy is ready to be opened for the first time
Trustpilot