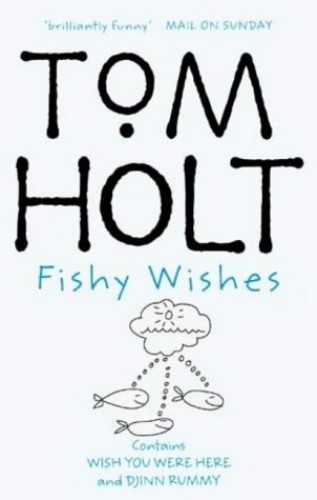 Two fantastic comic fantasies - WISH YOU WERE HERE and DJINN RUMMY - available for the first time in one volume.

WISH YOU WERE HERE - It was a busy day on Lake Chicopee. But it was a mixed bunch of sightseers and tourists that had the strange local residents rubbing their hands with delight. But most promising of all, there was Wesley Higgins, the young man from Birmingham, England, who was there because he knew the legend of the ghost of Okeewana. All he had to do was immerse himself in the waters of the lake and he would find his heart's desire. Well, it seemed like a good idea at the time.

DJINN RUMMY - In an aspirin bottle, nobody can hear you scream. Outside an aspirin bottle, however, things are somewhat different. And when Kayaguchiya Integrated Circuits III (Kiss, to his friends), a Force Twelve genie with an attitude, is released after fourteen years of living with two dozen white tablets, there's bound to be trouble ... All Jane wanted to do was end her life in peace, in the privacy of a British Rail waiting room, but now she's got herself a genie for company. Lucky old Jane. Lucky, that is, until the apocalypse rears its ugly head.

Two fantastic comic fantasies - WISH YOU WERE HERE and DJINN RUMMY - available for the first time in one volume.

Praise for Tom Holt: 'Uniquely twisted ... cracking gags' Rob Grant, THE GUARDIAN, 'Frantically wacky and wilfully confusing ... gratifyingly clever and very amusing' MAIL ON SUNDAY, 'Frothy, fast and funny' SCOTLAND ON SUNDAY, 'Dazzling' TIME OUT, 'Wildly imaginative' NEW SCIENTIST
Tom Holt is the author of such comic fantasy classics as: Expecting Someone Taller, Who's Afraid of Beowulf?, Flying Dutch, Ye Gods!, Overtime, Here Comes the Sun, Grailblazers, Faust Among Equals, Odds and Gods, Djinn Rummy, My Hero, Paint Your Dragon and Open Sesame
GOR001307635
9781841493473
1841493473
Fishy Wishes: Omnibus 7 by Tom Holt
Tom Holt
Used - Very Good
Paperback
Little, Brown Book Group
2004-10-07
656
N/A
Book picture is for illustrative purposes only, actual binding, cover or edition may vary.
This is a used book - there is no escaping the fact it has been read by someone else and it will show signs of wear and previous use. Overall we expect it to be in very good condition, but if you are not entirely satisfied please get in touch with us
Trustpilot