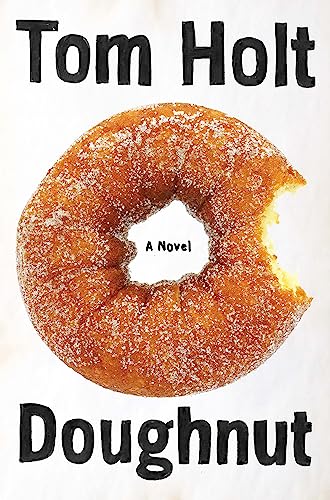 'Tom Holt's Doughnut presents a roller-coaster ride through the world of physics and the origins of the universe.' - Library Journal

'One for physicists as well as Krispy Kreme-loving policemen.' - T3

The doughnut is a thing of beauty.
A circle of fried doughy perfection.
A source of comfort in trying times, perhaps.
For Theo Bernstein, however, it is far, far more.

Things have been going pretty badly for Theo Bernstein. An unfortunate accident at work lost him his job (and his work involved a Very Very Large Hadron Collider, so he's unlikely to get it back). His wife has left him. And he doesn't have any money.

Before Theo has time to fully appreciate the pointlessness of his own existence, news arrives that his good friend Professor Pieter van Goyen, renowned physicist and Nobel laureate, has died.

By leaving the apparently worthless contents of his safety deposit to Theo, however, the professor has set him on a quest of epic proportions. A journey that will rewrite the laws of physics. A battle to save humanity itself.

This is the tale of a man who had nothing and gave it all up to find his destiny - and a doughnut.

From one of the best-loved comic writers in fantasy fiction comes another absurdly witty science fiction title - perfect for fans of Douglas Adams or Terry Pratchett.

Tom Holt's first book was published when he was just thirteen and, to his horror, he was hailed as an infant prodigy. While studying at Oxford, however, he discovered bar billiards and turned from poetry to comic fiction.
GOR004707000
9781841497808
1841497800
Doughnut by Tom Holt
Tom Holt
Used - Very Good
Paperback
Little, Brown Book Group
2013-03-05
400
N/A
Book picture is for illustrative purposes only, actual binding, cover or edition may vary.
This is a used book - there is no escaping the fact it has been read by someone else and it will show signs of wear and previous use. Overall we expect it to be in very good condition, but if you are not entirely satisfied please get in touch with us
Trustpilot