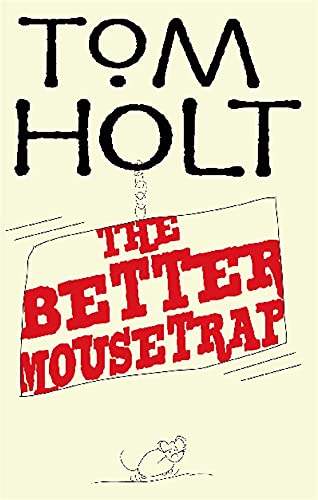 The Better Mousetrap by Tom Holt

The latest madcap comic fantasy from one of Britain's funniest writers.

It touches all our lives; our triumphs and tragedies, our proudest achievements, our most traumatic disasters. Alloyed of love and fear, death and fire and the inscrutable acts of the gods, insurance is indeed the force that binds the universe together.

Hardly surprising, therefore, that Frank Carpenter, one of the foremost magical practitioners of our age, felt himself irresistibly drawn to it. Until, that is, he met Jane, a high-flying corporate heroine with an annoying habit of falling out of trees and getting killed. Repeatedly.

It's not long before Frank and Jane find themselves face to face with the greatest enigma of our times: When is a door not a door? When it's a mousetrap.

A madcap comic fantasy from one of Britain's funniest writers.

Inventively entertaining ...make you both laugh out loud and stop and think * SFX *
Tom Holt's comic fantasy is a great, uplifting read, fit to grace any reader's book collection * Waterstone's Books Quarterly *
Highly amusing ... Eloquently snarky prose * Publishers Weekly *
Holt's quirky characters and whimsical voice successfully infuse life into this entertaining romantic comedy * Publishers Weekly *
Tom Holt is the author of more than twenty comic fantasy novels and a number of acclaimed historical novels.
GOR011196816
9781841495040
1841495042
The Better Mousetrap: J.W. Wells & Co. Book 5 by Tom Holt
Tom Holt
J.W. Wells & Co.
Used - Like New
Paperback
Little, Brown Book Group
2009-05-07
384
N/A
Book picture is for illustrative purposes only, actual binding, cover or edition may vary.
The book has been read, but looks new. The book cover has no visible wear, and the dust jacket is included if applicable. No missing or damaged pages, no tears, possible very minimal creasing, no underlining or highlighting of text, and no writing in the margins
Trustpilot