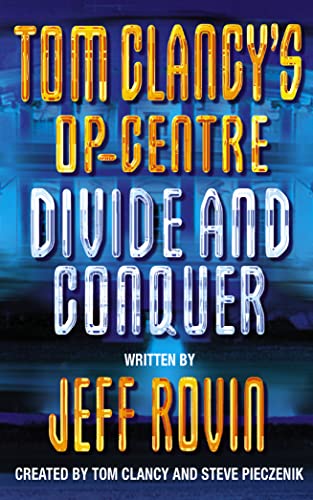 Divide and Conquer by Tom Clancy

The latest volume in the acclaimed series of high-tech, high-action thrillers.

The latest volume in the acclaimed series of high-tech, high-action thrillers.

In his position as head of Op-Centre - the National Crisis Management Centre in Washington - Paul Hood has handled emergencies around the world. Now he is facing a potential disaster much closer to home. For the US President - the man with the most demanding job in the world - is cracking up under the pressure.

Hood has also received disturbing reports about growing tension between Iran and the former Soviet republic of Azerbaijan over Caspian Sea oil. Alarmingly, it appears that someone with their own agenda within the US State Department is plotting to start a war by sending a secret team of agents to blow up a Caspian oil rig and laying the blame on the Iranians.

With the increasingly disoriented President sidelined, Hood must act fast. His only hope is to join forces with his counterpart in Russia's own Op-Centre in a desperate attempt to avert the crisis in the Caspian - and to root out the rogue elements within the US Government who are threatening to bring down the President.

Tom Clancy's novels include The Hunt for Red October, Red Storm Rising, Patriot Games, The Cardinal of the Kremlin, Clear and Present
Danger, The Sum of All Fears, Without Remorse, Debt of Honour and Executive Orders.
Steve Pieczenik served as principal hostage negotiator and international crisis manager while Deputy Assistant Secretary of State under Henry Kissinger, Cyrus Vance and James Baker. He is also the author of the psycho-political thrillers The Mind Palace, Blood Heat, Maximum Vigilance and Pax Pacifica.

GOR003121710
9780006513988
0006513980
Divide and Conquer (Tom Clancy's Op-Centre, Book 8) by Tom Clancy
Tom Clancy
Tom Clancy's Op-Centre
Used - Very Good
Paperback
HarperCollins Publishers
2000-09-04
480
N/A
Book picture is for illustrative purposes only, actual binding, cover or edition may vary.
This is a used book - there is no escaping the fact it has been read by someone else and it will show signs of wear and previous use. Overall we expect it to be in very good condition, but if you are not entirely satisfied please get in touch with us
Trustpilot