From Source to Sea Tom Chesshyre 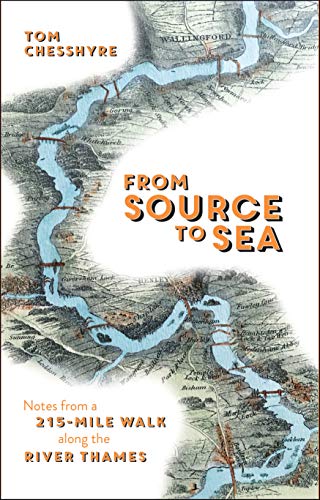 From Source to Sea by Tom Chesshyre

Authors, artists and amblers have always felt the pull of the Thames, and now Tom Chesshyre is following in their footsteps. He's walking more than 200 miles from the Cotswolds to the North Sea. Seeing some familiar sights through new eyes, Chesshyre explores the living present and remarkable past of England's longest and most iconic river.

From Source to Sea: Notes from a 215-Mile Walk Along the River Thames by Tom Chesshyre

Over the years, authors, artists and amblers aplenty have felt the pull of the Thames, and now travel writer Tom Chesshyre is following in their footsteps.

He's walking the length of the river from the Cotswolds to the North Sea - a winding journey of over two hundred miles. Join him for an illuminating stroll past meadows, churches and palaces, country estates and council estates, factories and dockyards. Setting forth in the summer of Brexit, and meeting a host of interesting characters along the way, Chesshyre explores the living present and remarkable past of England's longest and most iconic river.

'I found myself quickly falling into step beside Tom Chesshyre, charmed by his amiable meanderings, pointed observations and meetings with strangers along the way... but most of all Chesshyre champions the joys of a good walk through fascinating surroundings - with beer and blisters at the end of the day' -- Fergus Collins * BBC Countryfile Magazine *
'Readers should perhaps prepare themselves for a whole new wave of Whither England? type books in the months and years ahead, and Chesshyre's is a not unwelcome early attempt to answer that seemingly urgent question.' -- Ian Sansom, Times Literary Supplement
`Journalist Tom Chesshyre has produced a readable, richly entertaining and highly informative book in From Source to Sea' * Chris Gray, The Oxford Times *
`Chesshyre cuts an engaging figure... He has a true journalist's instinct for conversational encounters - Kurdistani picnickers in the river meadows upstream of London, pub thugs in the badlands of the lower Thames, other Thames Path pilgrims he rubs up against along the way. He also demonstrates a nose for a juicy tale, from a pre-Raphaelite menage-atrois at Kelmscott Manor to the discreet nookie column in the Marlow Free Press. Chesshyre's journey is rich in history and thick with characters, fables and happenstance - a highly readable and entertaining saunter along England's iconic river.' * Christopher Somerville, author of Britain's Best Walks *
'An enjoyable refuge from everyday life' -- Clive Aslet, The Times
`Chesshyre's book stands out from other accounts of walking the Thames Path in its contemporary (post-Brexit, pre-Trump) immediacy. A portrait of England and the English in our time, it is peppered with fascinating historical and literary markers. It's also a usefully opinionated guide to watering-holes and B&Bs from the sleepy Cotswold villages to the dystopian edgelands of the estuary.' -- Christina Hardyment, author of Writing the Thames
`Beautifully written and exquisite in observation, Tom Chesshyre's latest book, From Source to Sea is a fitting tribute to the mighty Thames that flows like a golden thread through the history of Britain.' -- Harry Bucknall, author of Like a Tramp, Like a Pilgrim
`The result is this enjoyable travelogue, guiding the reader through the delightful towns and cities strung like pearls along the river, the 'liquid history' of the Thames from the Romans to the Profumo Affair and the beloved works of art and literature inspired by life on its banks, most famously Alice in Wonderland, Three Men in a Boat and The Wind in the Willows... a welcome addition to the Thames cannon.' * Richard Tarrant, The Lady *
Tom Chesshyre's passion for adventure has taken him all around the world, including up and down his fair share of rivers. A travel writer for The Times, he's visited over 90 countries.
GOR009149174
9781786852861
1786852861
From Source to Sea: Notes from a 215-Mile Walk Along the River Thames by Tom Chesshyre
Tom Chesshyre
Used - Very Good
Paperback
Summersdale Publishers
2018-06-14
320
N/A
Book picture is for illustrative purposes only, actual binding, cover or edition may vary.
This is a used book - there is no escaping the fact it has been read by someone else and it will show signs of wear and previous use. Overall we expect it to be in very good condition, but if you are not entirely satisfied please get in touch with us
Trustpilot