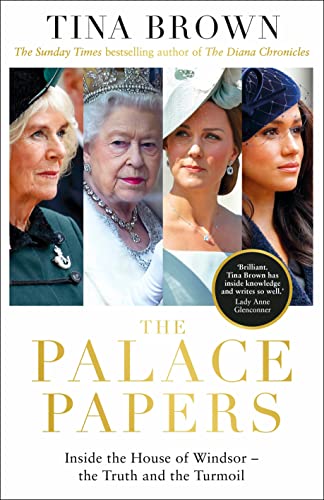 The Palace Papers by Tina Brown

The Palace Papers: Inside the House of Windsor, the Truth and the Turmoil by Tina Brown

From the Queen's stoic resolve to the crisis of Meghan and Harry. From the ascendance of Camilla and Kate to the downfall of Andrew. Full of remarkable inside access, The Palace Papers by Sunday Times bestselling author Tina Brown will change how you understand the Royal Family.

'Eye-poppingly revealing . . . impeccable sources, historical heft and canny insights served up with a zingy wit. There are many royal biographers, but few as good as this. She turns gossip into the first draft of history.' TELEGRAPH

'Never again', became Queen Elizabeth II's mantra shortly after Diana's death. More specifically, there could never be 'another Diana' - a member of the family whose global popularity upstaged, outshone, and posed an existential threat to the British monarchy. Picking up where The Diana Chronicles left off, The Palace Papers reveals how the royal family reinvented itself after the traumatic years when Diana's blazing celebrity ripped through the House of Windsor like a comet.

Tina Brown takes readers on a tour de force journey that shows the Queen's stoic resolve as she coped with the passing of Princess Margaret, the Queen Mother and her partner for seven decades, Prince Philip, and triumphed in her Jubilee years even as the family dramas raged around her. She explores Prince Charles's determination to make Camilla his queen, the tension between William and Harry who are on 'different paths', the ascendance Kate Middleton, the disturbing allegations surrounding Prince Andrew and Jeffrey Epstein, and Harry and Meghan's stunning decision to 'step back' as senior royals. Despite the fragile monarchy's best efforts, 'never again' seems fast approaching.

Praise for The Diana Chronicles:
'Unputdownable. . . extraordinary. . . allows us an unprecedented look at the world and mind of the most famous person on the planet.' Helen Mirren

'A blockbuster: a rollicking, page-turning, fast-quipping, gripping romp of a read. It is the work of a seasoned, serious journalist.' The Times

Tina Brown is an award-winning writer and editor-in-chief of Tatler, Vanity Fair, and the New Yorker; founder of the Daily Beast and the live event platform Women in the World summits. In 2017 she published The Vanity Fair Diaries, chosen as one of the best books of the year by Time, People, Amazon.com, the Guardian, the Economist, Entertainment Weekly and Vogue. She lives in New York City.
NGR9781529124705
9781529124705
1529124700
The Palace Papers: Inside the House of Windsor, the Truth and the Turmoil by Tina Brown
Tina Brown
New
Hardback
Cornerstone
2022-04-26
592
N/A
Book picture is for illustrative purposes only, actual binding, cover or edition may vary.
This is a new book - be the first to read this copy. With untouched pages and a perfect binding, your brand new copy is ready to be opened for the first time
Trustpilot