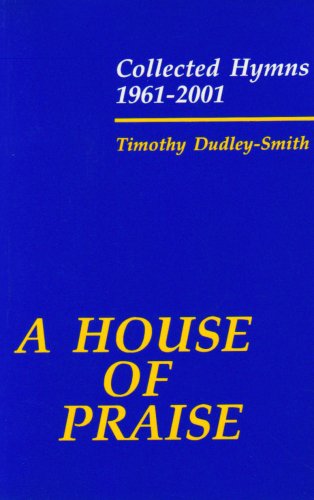 A House of Praise: Collected Hymns 1961-2001 by Timothy Dudley-Smith

A House of Praise brings together the collected hymn texts of Timothy Dudley-Smith, one of the most respected and widely published contemporary English hymnwriters. This volume of 285 hymns, including 50 new texts, is arranged thematically. It includes informative notes on all the hymns listing themes, suggested tunes, and details of interest, with an extensive series of indexes.

A House of Praise: Collected Hymns 1961-2001 by Timothy Dudley-Smith

A House of Praise brings together the collected hymn texts of Timothy Dudley-Smith, one of the most respected and widely published contemporary English hymnwriters. This volume of 285 hymns, including 50 new texts, is arranged thematically. It includes informative notes on all the hymns listing themes, suggested tunes, and details of interest, with an extensive series of indexes.
A House of Praise is a treasury of strong biblical texts for composers, pastors, and lovers of the gospel. The reader (or singer) is blessed by Dudley-Smith's absolute mastery of the English language and his sensitive use of carefully selected words in the service of biblical truth. Whether used for private devotion or corporate worship, these are texts that faithfully proclaim the sovereignty of the triune God, the centrality of the cross, and the necessity and beauty of faithful discipleship . . . [This is] another invaluable volume of God-honoring, Christ-centered texts for Christian worship. * Carl Stam, Reformed Worship (USA), Sept 04 *
This is the splendid harvest of 40 years . . . Dudley-Smith never lets us down. There are no weak lines, no approximate rhymes, no distortions of syntax, no fumbled metres. Some hymns may be less memorable than others, but there are no bad hymns here. One is reminded of John Wesley, writing about his and his brother's work: "In these hymns there is no doggerel; no botches; nothing put in to patch up the rhyme; no feeble expletives . . . nothing turgid or bombast . . . no cant expressions, no words without meaning." . . . These hymns dignify the form itself. They have an artistic integrity without which the singing of the gospel becomes second-rate . . . These hymns restore our faith, not only in the gospel, but also in the action of singing that gospel together, with heart, and soul, and voice. * J. R. Watson, Church Times 30 July 04 *
Bishop Timothy Dudley-Smith's hymns have been rightly acclaimed as hymnody, but his new collection of 285 proves to be a most helpful aid to private devotion in addition to their value to worship in church and cathedral. * John Pollock, Church of England Newspaper May 04 *
For, above all, these hymns are essentially pastoral: they nurture faith, they encourage, they teach, they inspire. These are texts to make worshippers think, understand, feel and respond; they are not designed to induce shock or guilt. They do not, for the most part, probe the outer edges of discipleship in radical, prophetic confrontation. Hymnody has room for prophetic as well as pastoral material, but the former will need to be rewritten by each new generation, whereas the latter will endure; and in the case of Timothy Dudley-Smiths work, deservedly so. This book is a resource to treasure, to explore and to use. Publishing a complete collection rather than a selective one may have been a bold move; but it was certainly the right move. * Martin Leckebusch, News of Hymns March 2004 *
If we cannot yet call Bishop Dudley-Smith the cream of the 20th-century hymn writers, it is because he now spans two centuries and sets the 21st off to a richly rewarding start. If 'Tell out, my soul' and 'Lord, for the years' are already classics, later work may yet be equally valued and more may be published, even written . . . This resource would enrich every church. Many Christians will also find it a devotional and literary treasure-store. * Christopher Idle, Evangelicals Now, May 2004 *
Educated at Cambridge University, Timothy Dudley-Smith was ordained in 1950 as assistant curate of St Paulas Church, Northumberland Heath. From 1953 he was head of the Cambridge University Mission in Bermondsey, London, and in the 1960s served as secretary of the Church Pastoral Aid Society. In 1973 he became Archdeacon of Norwich and in 1981 Bishop of Thetford; he retired in 1991. He is a Fellow of the Hymn Society of the United States and Canada, and in 2003 was appointed an honorary vice-president of the Hymn Society of Great Britain and Ireland. In the same year he was awarded an OBE for services to hymnody.
GOR001956573
9780191001598
0191001597
A House of Praise: Collected Hymns 1961-2001 by Timothy Dudley-Smith
Timothy Dudley-Smith
Used - Very Good
Paperback
Oxford University Press
2004-02-12
592
N/A
Book picture is for illustrative purposes only, actual binding, cover or edition may vary.
This is a used book - there is no escaping the fact it has been read by someone else and it will show signs of wear and previous use. Overall we expect it to be in very good condition, but if you are not entirely satisfied please get in touch with us
Trustpilot