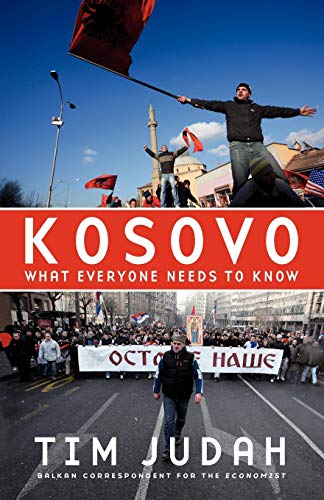 Kosovo: What Everyone Needs to Know (R) by Tim Judah

On February 17, 2008, Kosovo declared its independence, becoming the seventh state to emerge from the break-up of the former Yugoslavia. A tiny country of just two million people, 90% of whom are ethnic Albanians, Kosovo is central - geographically, historically, and politically - to the future of the Western Balkans and, in turn, its potential future within the European Union. But the fate of both Kosovo, condemned by Serbian leaders as a "fake state" and the region as a whole, remains uncertain. In Kosovo: What Everyone Needs to Know, Tim Judah provides a straight-forward guide to the complicated place that is Kosovo. Judah, who has spent years covering the region, offers succinct, penetrating answers to a wide range of questions: Why is Kosovo important? Who are the Albanians? Who are the Serbs? Why is Kosovo so important to Serbs? What role does Kosovo play in the region and in the world? Judah reveals how things stand now and presents the history and geopolitical dynamics that have led to it. The most important of these is the question of the right to self-determination, invoked by the Kosovo Albanians, as opposed to right of territorial integrity invoked by the Serbs. For many Serbs, Kosovo's declaration of independence and subsequent recognition has been traumatic, a savage blow to national pride. Albanians, on the other hand, believe their independence rights an historical wrong: the Serbian conquest (Serbs say "liberation") of Kosovo in 1912. For anyone wishing to understand both the history and possible future of Kosovo at this pivotal moment in its history, this book offers a wealth of insight and information in a uniquely accessible format.
"A straightforward guide to the history and geopolitics of Kosovo and the first book on the country since its declaration of independence in February this year."--The Economist
"Packs a surprising amount of nuance into a slim volume... a solid introduction to an important topic."--Booklist
"Judah does a commendable job of telling the dense story in an understandable fashion. Because the region changes so quickly, an up-to-date history like this is welcome."--Library Journal
"[A] concise and updated version of his longer and more detailed history published in 2000...Judah's short history of Kosovo is a fair and sympathetic account of an impossible situation..."--New York Review of Books
Tim Judah is a correspondent for The Economist covering the Balkans. He is the author of Kosovo: War and Revenge, and The Serbs: History, Myth and the Destruction of Yugoslavia.
Preface: Why Kosovo? ; Albanians ; Serbs ; Creating History ; From Dardania to Yugoslavia ; Kosovo in Yugoslavia ; From the Golden Age to the Memorandum ; The Milosevic-Rugova Years ; The War ; Kosovo after 1999 ; March 2004 and the Ahtisaari Plan ; Kosovo and the Region ; Kosovo and the World ; Not the Last Chapter: Independence
GOR003959829
9780195373455
0195373456
Kosovo: What Everyone Needs to Know (R) by Tim Judah
Tim Judah
What Everyone Needs To Know (R)
Used - Very Good
Paperback
Oxford University Press Inc
2008-09-29
208
N/A
Book picture is for illustrative purposes only, actual binding, cover or edition may vary.
This is a used book - there is no escaping the fact it has been read by someone else and it will show signs of wear and previous use. Overall we expect it to be in very good condition, but if you are not entirely satisfied please get in touch with us
Trustpilot