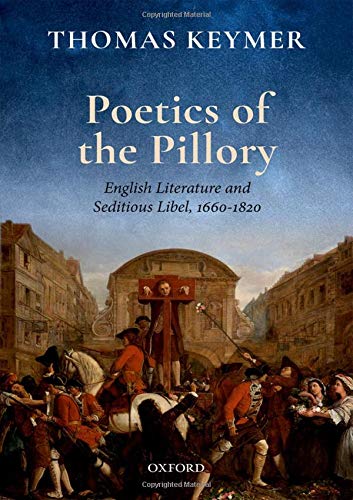 This volume explores literary censorship from 1660 to 1820 and examines the relationship between pervasive literary modes of the long eighteenth century and the control of seditious libel and punishment in the public pillory.

On the lapse of the Licensing Act in 1695, Thomas Macaulay wrote in his History of England, 'English literature was emancipated, and emancipated for ever, from the control of the government'. It's certainly true that the system of prior restraint enshrined in this Restoration measure was now at an end, at least for print. Yet the same cannot be said of government control, which came to operate instead by means of post-publication retribution, not pre-publication licensing, notably for the common-law offence of seditious libel. For many of the authors affected, from Defoe to Cobbett, this new regime was a greater constraint on expression than the old, not least for its alarming unpredictability, and for the spectacular punishment-the pillory-that was sometimes entailed. Yet we may also see the constraint as an energizing force. Throughout the eighteenth century and into the Romantic period, writers developed and refined ingenious techniques for communicating dissident or otherwise contentious meanings while rendering the meanings deniable. As a work of both history and criticism, this book traces the rise and fall of seditious libel prosecution, and with it the theatre of the pillory, while arguing that the period's characteristic forms of literary complexity-ambiguity, ellipsis, indirection, irony-may be traced to the persistence of censorship in the post-licensing world. The argument proceeds through case studies of major poets and prose writers including Dryden, Defoe, Pope, Fielding, Johnson, and Southey, and also calls attention to numerous little-known satires and libels across the extended period.
The study derives a substantial part of its vitality from the way in which it includes, alongside the big names, obscure political pamphlets such as Nero the Second, 'What Makes a Libel', and Isaac Dalton's Shift Shifted. Riveting, also, is its analysis of the pillory in visual culture, starting from Cromwellian woodcuts to Victorian illustrations by William Hogarth and Eyre Crowe ... Ultimately Poetics of the Pillory is a crucial study, particularly for our times, as social media platforms resurrect the pillory digitally, while governmental surveillance and censorship reach a crescendo in the developing as well as the developed world. * Doyeeta Majumder, Modern Lanuage Review *
For Thomas Keymer in his beautifully detailed history, such strategies of evasion are one of the things that make seditious literary texts worth reading, forms of energetic 'creativity and rhetorical complexity' for which, perhaps counterintuitively, we have the early modern political state to thank. * Clare Bucknell, London Review of Books *
There is a wealth of learning here. * Los Angeles Review of Books *
...a major addition to the well-established critical discussion about the links between literature and censorship. * Paul Keen, Eighteenth-Century Fiction *
Armed against any Whiggish optimism, Keymer traces the flexible boundary between literature and law across more than a century and a half with exceptional deftness-a huge amount of material has been digested and arranged here so as to be read with great ease and enjoyment. . . . A whole series of major authors emerge from Keymer's study in a fresh perspective-Dryden, Andrew Marvell, Pope, Daniel Defoe, Fielding, Johnson, and most strikingly Robert Southey. This is a book of the first importance. * David Womersley, Studies in English Literature *
Thomas Keymer's excellent new book is a combined history and critical study of the ways in which conditions of censorship shaped English literature during the long eighteenth century (1660-1820). The book began life as the Clarendon Lectures given at the University of Oxford in 2014-15; these have been expanded with rich archival and critical detail, without sacrificing the energy and lucidity of the lectures. * Niall Allsopp, Seventeenth-Century News *
Thomas Keymer is Chancellor Henry N. R. Jackman University Professor of English at the University of Toronto. Before moving to Toronto in 2006, he taught for six years at Royal Holloway, University of London, and for ten years at St Anne's College, Oxford. He is a Fellow of the Royal Society of Canada, the Royal Historical Society, and the English Association, and has also held fellowships with the John Simon Guggenheim Memorial Foundation, the Leverhulme Trust, and All Souls College, Oxford. His work is mainly focused on Restoration, eighteenth-century, and Romantic-era British and Irish literature. Between 2013 and 2017 he directed the University of Toronto's Graduate Program in Book History & Print Culture, and he currently serves as General Editor of the Review of English Studies (OUP) and co-General Editor of the Cambridge Edition of the Works & Correspondence of Samuel Richardson.
Introduction 1660-1700. Faint Meaning: Dryden and Restoration Censorship 1700-1740. Libels in Hieroglyphics: Pope, Defoe 1730-1780. The Trade of Libelling: Fielding, Johnson 1780-1820. Southey's New Star Chamber: Literature, Revolution, and Romantic-Era Libel Conclusion: England in 1820
NPB9780198744498
9780198744498
0198744498
Poetics of the Pillory: English Literature and Seditious Libel, 1660-1820 by Thomas Keymer (Chancellor Henry N. R. Jackman University Professor of English, University of Toronto)
Thomas Keymer (Chancellor Henry N. R. Jackman University Professor of English, University of Toronto)
Clarendon Lectures in English
New
Hardback
Oxford University Press
2019-10-30
342
N/A
Book picture is for illustrative purposes only, actual binding, cover or edition may vary.
This is a new book - be the first to read this copy. With untouched pages and a perfect binding, your brand new copy is ready to be opened for the first time
Trustpilot