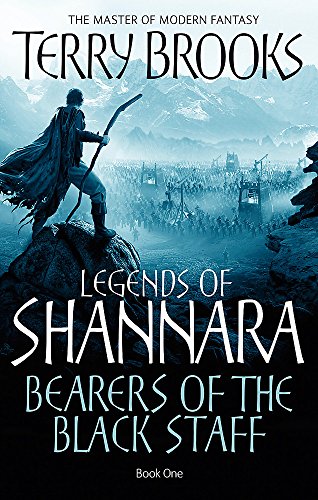 Bearers Of The Black Staff by Terry Brooks

The first book in the new Legends of Shannara fantasy duology from international bestseller Terry Brooks.

Bearers Of The Black Staff: Legends of Shannara: Book One by Terry Brooks

THE SHANNARA CHRONICLES IS NOW A MAJOR TV SERIES

Five hundred years have passed since the devastating demon-led war that almost exterminated humankind. Those who escaped the carnage were led to sanctuary by the boy saviour known as Hawk: the gypsy morph. But now, the unimaginable has come to pass: the cocoon of protective magic surrounding the valley has vanished.

When Sider Ament, last surviving Knight of the Word, detects unknown predators stalking the valley, and Trackers from the human village of Glensk Wood find two of their own gruesomely killed, there can be no doubt: the once safe haven of generations has been laid bare. Together, the young Trackers, the aging Knight and a daring Elf princess race to spread word of the encroaching danger. But suspicion and hostility among their countrymen threaten to doom their efforts from within, while beyond the breached borders, a ruthless Troll army masses for invasion. Standing firm between the two, the last wielder of the black staff and its awesome magic must find a successor to carry on the fight against the cresting new wave of evil.

'A master of the craft . . . required reading' Brent Weeks

'I can't even begin to count how many of Terry Brooks's books I've read (and re-read) over the years' Patrick Rothfuss, author of The Name of the Wind

'I would not be writing epic fantasy today if not for Shannara' Peter V. Brett, author of The Painted Man

BEARERS OF THE BLACK STAFF
THE MEASURE OF THE MAGIC

I can't even begin to count how many of Terry Brooks's books I've read (and re-read) over the years -- Patrick Rothfuss, author of THE NAME OF THE WIND
Terry's place is at the head of the fantasy world -- Philip Pullman

I would not be writing epic fantasy today if not for Shannara
Peter V. Brett, author of THE PAINTED MAN

-- Peter V. Brett, author of THE PAINTED MAN
If you haven't read Terry Brooks, you haven't read fantasy -- Christopher Paolini, author of ERAGON
Chronicling another piece if the amazingly extensive Shannaran history . . . Light, enjoyable reading that keeps a good pace, it's a great fantasy read for diehard fans aNd newcomers alike * WATERSTONE'S BOOKS QUARTERLY *
Exciting and engrossing * SCIFINOW *
Terry Brooks was a practising attorney for many years, but now writes full-time. His first novel, THE SWORD OF SHANNARA, remained on the NEW YORK TIMES bestseller list for five months, and he is widely regarded to have started the post-Tolkien boom in epic fantasy.
GOR003028535
9781841495859
1841495859
Bearers Of The Black Staff: Legends of Shannara: Book One by Terry Brooks
Terry Brooks
Legends of Shannara
Used - Very Good
Paperback
Little, Brown Book Group
2011-03-12
512
N/A
Book picture is for illustrative purposes only, actual binding, cover or edition may vary.
This is a used book - there is no escaping the fact it has been read by someone else and it will show signs of wear and previous use. Overall we expect it to be in very good condition, but if you are not entirely satisfied please get in touch with us
Trustpilot