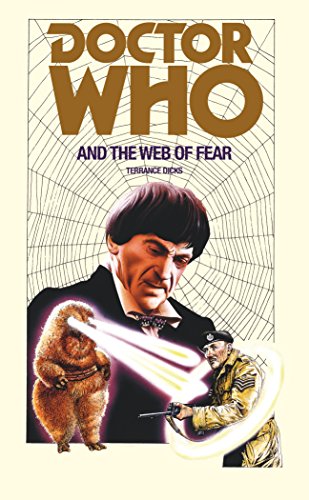 Doctor Who and the Web of Fear by Terrance Dicks

With time running out, the Doctor and his friends realise they can trust no one...

This novel is based on a Doctor Who story which was originally broadcast from 3 February-9 March 1968.

Doctor Who and the Web of Fear by Terrance Dicks

The TARDIS is engulfed by a mysterious web-like substance in space. Breaking free, the Doctor and his companions Jamie and Victoria land in the London Underground system. But a spreading killer mist has meant that London has been evacuated. The Great Intelligence is back - and its robot Yeti are roaming the streets and the underground tunnels.

The Doctor, Jamie, and Victoria team up with an army unit working with their old friend Professor Travers to combat the menace. They soon realise, however, that someone in the group must be working for the Intelligence. With time running out, the Doctor and his friends realise they can trust no one...

This novel is based on a Doctor Who story which was originally broadcast from 3 February-9 March 1968.

Terrance Dicks became Script Editor of Doctor Who in 1968, co-writing Patrick Troughton's classic final serial, The War Games, and editing the show throughout the entire Jon Pertwee era to 1974. He wrote many iconic episodes and serials for the show after, including Tom Baker's first episode as the Fourth Doctor, Robot; Horror at Fang Rock in 1977; State of Decay in 1980; and the 20th anniversary special, The Five Doctors in 1983. Terrance novelised over sixty of the original Doctor Who stories for Target books, including classics like Doctor Who and the Abominable Snowmen and Doctor Who and the Auton Invasion, inspiring a generation of children to become readers and writers. He died in August 2019, only weeks before the publication of his final Doctor Who short story, 'Save Yourself', in The Target Storybook.
NGR9781785940361
9781785940361
1785940368
Doctor Who and the Web of Fear by Terrance Dicks
Terrance Dicks
New
Paperback
Ebury Publishing
2016-04-28
160
N/A
Book picture is for illustrative purposes only, actual binding, cover or edition may vary.
This is a new book - be the first to read this copy. With untouched pages and a perfect binding, your brand new copy is ready to be opened for the first time
Trustpilot