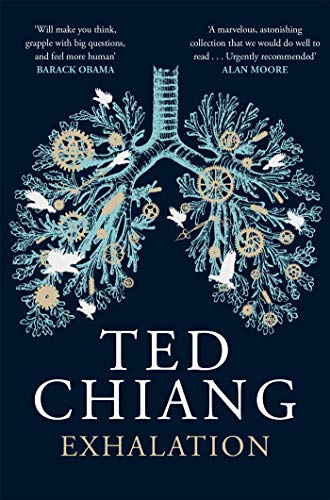 From an award-winning science fiction writer (whose short story 'The Story of Your Life' was the basis for the Academy Award-nominated movie Arrival), the long-awaited second collection of stunningly original, humane, and celebrated short stories.

'One of the most exciting writers in science fiction . . . CHIANG Although dark in premise, these parables - threaded through with references to ancient mythology and folklore - are filled with hope and humanism: a balm for anxious souls.' DAILY TELEGRAPH

From the acclaimed author of Stories of Your Life and Others, the basis for the Oscar-nominated Arrival, the long-awaited second collection of stories, each of which remakes speculative fiction in its own unique fashion.

'Chiang's writing . . . inspires awe for the natural properties of the universe; it renders the fundamentals of science poignant and affecting.' ECONOMIST

From the acclaimed author of Stories of Your Life and Others - the basis for the Academy Award nominated film Arrival - comes a groundbreaking second collection of short fiction: nine stunningly original, provocative, and poignant stories. These are tales that tackle some of humanity's oldest questions along with new quandaries that only Ted Chiang could imagine.

In 'The Merchant and the Alchemist's Gate', a portal through time forces a fabric-seller in ancient Baghdad to grapple with past errors and the temptation of second chances. In the epistolary 'Exhalation', an alien scientist makes a shocking discovery with ramifications not just for his own people, but for all of reality. In 'Anxiety is the Dizziness of Freedom', the ability to glimpse into alternate universes necessitates a radically new examination of the concepts of choice and free will.

In Exhalation, Ted Chiang addresses the most fundamental of issues - What is the nature of the universe? What does it mean to be human? - alongside others that no one else has even imagined. And, each in its own way, the stories prove that complex and thoughtful science fiction can rise to new heights of beauty, meaning, and compassion.

A collection of short stories that will make you think, grapple with big questions, and feel more human. The best kind of science fiction. -- Barack Obama
Beautifully written and conceived, this is a marvelous, astonishing collection that we would do well to read before the worlds it conjures are upon us. Urgently recommended. -- Alan Moore
One of the most exciting writers in science fiction . . . Although dark in premise, these parables - threaded through with references to ancient mythology and folklore - are filled with hope and humanism: a balm for anxious souls. * Daily Telegraph *
Deeply beautiful . . . This book is as generous as it is marvelous, and I'm left feeling nothing so much as grateful for it. * New York Times *
Deeply beautiful stories . . . Each thoughtful, elegantly crafted story poses a philosophical question; Chiang curates all nine into a conversation that comes full circle, after having traversed remarkable terrain. * New York Times 'The 10 Best Books of 2019' *
Chiang's writing . . . inspires awe for the natural properties of the universe; it renders the fundamentals of science poignant and affecting. * Economist *
A scintillating cavalcade of ideas . . . Chiang breathes new life into well-worn SF themes such as time travel, artificial intelligence and parallel universes. * Financial Times 'Books of the Year 2019' *
A beguiling mix of compassion and awe, worthy of comparisons to the work of Philip K. Dick . . . An immensely pleasing book. * San Francisco Chronicle *
We all know Ted Chiang is a fucking genius, but: Ted Chiang is a fucking genius. -- Carmen Maria Machado
Chiang is a virtuoso of short fiction . . . This collection is a stunning achievement in speculative fiction, from an author whose star will only continue to rise. * Los Angeles Review of Books *
Ted Chiang's stories are lean, relentless, and incandescent. -- Colson Whitehead
Illuminating, thrilling . . . Individual sentences possess the windowpane transparency that George Orwell advocated as a prose ideal. -- Joyce Carol Oates * New Yorker *
'Ted Chiang has no contemporary peers . . . His name deserves to be mentioned in the same breath as Carver, Poe, Borges, and Kafka . . . You will inhale Exhalation in a single, stunned sitting, because true genius doesn't come along nearly as often as advertised. This is the real thing.' * Blake Crouch *
'Ted Chiang writes with such a matter-of-fact grace and visionary power that one simply takes on faith that his worlds and his characters exist, whether they are human or robot or parrot -- Karen Russell
Breaks down what it really means to be human. * Time *
So jammed with brilliant, mind-exploding ideas it's like the author packed fireworks between the covers. * National Public Radio *
'Meticulously crafted and innovative short fiction . . . Masterful and striking . . . plucks both heartstrings and gray matter in equal measure.' * Washington Post *
'Chiang produces deeply moving drama from fascinating first premises... These stories are brilliant experiments, and [Chiang's] commitment to exploring deep human questions elevates them to among the very best science fiction.' * Publisher's Weekly starred review *
'This stellar collection... begins with an instant classic... Visionary speculative stories that will change the way readers see themselves and the world around them: This book delivers in a big way.' * Kirkus starred review *
Each of his devastating stories mines little pieces of humanity from unexpected points of view. * Vulture *
'Explores emotional and physical landscapes with precise and incisive prose... Chiang remains one of the most skilled stylists in SF, and this will appeal to genre and literary-fiction fans alike.' * Booklist starred review *
'Chiang is always thought provoking, and his latest collection is no exception.' * Library Journal starred review *
'Chiang is a master. . . . The Alice Munro of science fiction.' * LitHub *
'[Chiang] is so good that this book qualifies as an event.' * Newsday *
Chiang has explored conventional tropes of science fiction in highly unconventional ways . . . each [story is] . . . likely to linger in the memory the way riddles may linger - teasing, tormenting, illuminating, thrilling.' * New Yorker *
Ted Chiang is a superstar . . . Every sentence is the perfect incision in the dissection of the idea at hand * Guardian *
Ted Chiang has long been one of science fiction's best-kept secrets. * GQ *
As perfect a collection of stories as I have ever read * Junot Diaz *
Ted Chiang's fiction has won four Hugo, four Nebula, and four Locus awards, and he is the recipient of the John W. Campbell Award for Best New Writer and the Theodore Sturgeon Memorial Award. His debut collection, Stories of Your Life and Others, has been translated into twenty-one languages. He was born in Port Jefferson, New York, and currently lives near Seattle, Washington.
Chapter - 1: The Merchant and the Alchemist's Gate Chapter - 2: Exhalation Chapter - 3: What's Expected of Us Chapter - 4: The Lifecycle of Software Objects Chapter - 5: Dacey's Patent Automatic Nanny Chapter - 6: The Truth of Fact, The Truth of Feeling Chapter - 7: The Great Silence Chapter - 8: Omphalos Chapter - 9: Anxiety Is the Dizziness of Freedom Chapter - i: Story Notes Acknowledgements - i: Acknowledgements
GOR010884619
9781529014495
1529014492
Exhalation by Ted Chiang
Ted Chiang
Used - Very Good
Paperback
Pan Macmillan
20200723
208
null null null null null null null null null null
Book picture is for illustrative purposes only, actual binding, cover or edition may vary.
This is a used book - there is no escaping the fact it has been read by someone else and it will show signs of wear and previous use. Overall we expect it to be in very good condition, but if you are not entirely satisfied please get in touch with us
Trustpilot