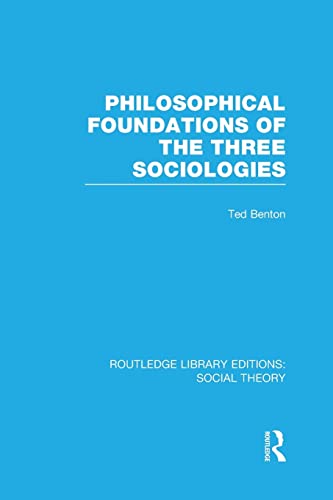 Philosophical Foundations of the Three Sociologies by Ted Benton

Philosophical Foundations of the Three Sociologies by Ted Benton

An extended historical and philosophical argument, this book will be a valuable text for all students of the philosophy of the social sciences. It discusses the serious alternatives to positivist and empiricist accounts of the physical sciences, and poses the debate between naturalism and anti-naturalism in the social sciences in new terms. Recent materialist and realist philosophies of science make possible a defence of naturalism which does not make concessions to positivism and which recognizes the force of several of the anti-positivist arguments from the main anti-naturalist (neo-Kantian) tradition.

The author presents a critical evaluation of empiricist and positivist theories of knowledge, and investigates some classic attempts at using them to provide the philosophical foundation for a scientific sociology. He takes the Kantian critique of empiricism as the starting point for the main anti-positivist and anti-naturalist philosophical approaches to the social studies. He goes on to investigate the inadequacy of post-Kantian arguments from Rickert, Weber, Winch and others, both against non-positivist forms of naturalism and as the possible source of a distinctive philosophical foundation for the social studies.

The book concludes with a critical investigation of the Marxian tradition and an attempt to establish the possibility of a materialist and realist defence of the project of a natural science of history, which escapes the fundamental flaws of both positivist and neo-Kantian attempts at philosophical foundation.

1. Introduction 2. Auguste Comte and Positivist Sociology 3. The Natural Sciences: Contemporary Positivism and the Concept of Explanation 4. The Natural Sciences: The Positivist Conception of Scientific Theory and its Competitors 5. Positivism and Ideology in the Work of Emile Durkheim 6. Kant and the Neo-Kantians 7. The Methodology of Max Weber, and Peter Winch's 'Corrections' 8. Karl Marx and Frederick Engels: Philosophy of History and Theory of Knowledge 9. Towards a Materialist Theory of Knowledge

NLS9781138978416
9781138978416
1138978418
Philosophical Foundations of the Three Sociologies by Ted Benton
Ted Benton
Routledge Library Editions: Social Theory
New
Paperback
Taylor & Francis Ltd
2015-11-26
240
N/A
Book picture is for illustrative purposes only, actual binding, cover or edition may vary.
This is a new book - be the first to read this copy. With untouched pages and a perfect binding, your brand new copy is ready to be opened for the first time
Trustpilot