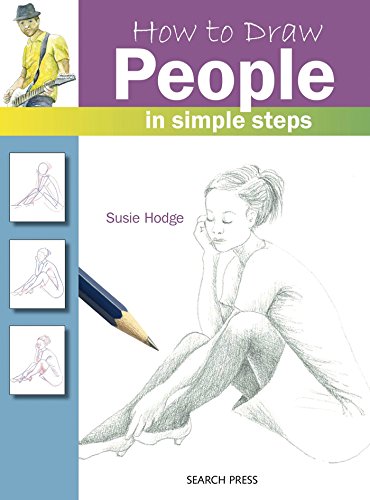 How to Draw: People by Susie Hodge

Artists, whatever their skill levels, will love this easy approach to what is normally regarded as a challenging subject.

How to Draw: People by Susie Hodge

Artists, whatever their skill levels, will love this easy approach to what is normally regarded as a challenging subject. An instructional introduction to drawing people, the book completely demystifies the whole process, showing how to build up great pictures using simple shapes and step-by-step illustrations. Words are not needed, as artists will be able to follow the sequences without any difficulty. Two colours are used effectively in a helpful way in each of the sequences and the superb collection of twenty eight drawings offers a range of different ages, ethnicities and poses. People at home, at work and at play are included, and using the building blocks in this book, beginners will soon find themselves producing fantastic finished drawings. More experienced artists interested in drawing figures will also find inspiration amongst the demonstrations on every page.

I always said I wasn't going to review this series because it has no words, so you're really left with not a lot to talk about. However, I caved in when it got to Insects because, if a series gets that esoteric, it pretty much has to be popular. I mean, not only was it the only book on that subject (exclusively) I've seen, but it's not exactly first-choice, is it? So here we have people. They must have done that one before, surely? Or was is a morning-after editorial meeting? " No, we've got to do the insects first." "Have you been watching Dr Who again?" "Yes, MALCOLM TUCKER!!!"* (Sorry, but I really am excited about this). For those of you who don't know, the stock-in-trade of this series is a single page which starts off with the simplest outlines, then builds up a basic shape and works it, in six steps, into a finished drawing. For a subject as complex as the human figure, that does mean there's an awful lot left out and some pretty giant leaps of the imagination, but it does work surprisingly well. If your main problem is getting started, then this is definitely the book for you and Susie does a fantastic job of choosing exactly which stages to illustrate so that you do get a genuine feeling of progression rather than giant steps. The only fly in the ointment is that I wish each demonstration had stopped at the fifth stage, the finished drawing, because these are in every case beautiful and sensitive works in pencil that need no further embellishment. The series, however, demands a colour finale and this is done by adding (what I think is) a completely unnecessary wash that covers the pencil lines and makes the whole thing, in almost all cases, look heavy and clumsy. I don't think it's a problem with Susie's work with a wash, I just think it doesn't work with what's gone before. A couple of examples. There's a woman sitting knitting. Perfectly fine in the drawing, but the colour wash leaves a chair she'll fall off if she moves and which doesn't look strong enough to support its own weight, let alone hers. And the man with the stick. I'm sorry, but that thing is two inches in diameter, it's nearly as thick as his arm! This is a quibble, but I do think it's best to ignore stage six and just stop at five. Treat this as what it claims to be, a book about drawing and put your paint box away. You get a fantastic variety of figures and poses, both static and in motion and a stripped-down approach that simply dissolves so much of the mystique that always surrounds figure drawing. * Peter Capaldi, Malcolm Tucker in The Thick Of It, was announced as the new Dr Who yesterday.

Susie Hodge shows us how to draw people in this new addition to the How to Draw series. These books really do break it down to the absolute basics. Text features on just one of the 32 pages. Apart from this introduction, the drawings do all the talking. Six stages per page take you from a simple stick outline to the finished coloured drawing, featuring children, men and women of all ages in various poses - walking, dancing, sitting, playing sport, skipping and knitting. It may be simple instruction, but complete beginners can get great results.

* Leisure Painter, The *
Susie Hodge has written over 100 books on art, art history and artistic techniques. In addition, she hosts lectures, talks and practical workshops, and regularly appears on television and radio, as well as in documentaries. She has twice been named the No. 1 art writer by the Independent.
GOR008783933
9781844489480
1844489485
How to Draw: People by Susie Hodge
Susie Hodge
How to Draw
Used - Like New
Paperback
Search Press Ltd
2013-09-30
32
N/A
Book picture is for illustrative purposes only, actual binding, cover or edition may vary.
The book has been read, but looks new. The book cover has no visible wear, and the dust jacket is included if applicable. No missing or damaged pages, no tears, possible very minimal creasing, no underlining or highlighting of text, and no writing in the margins
Trustpilot