V is for Vengeance Sue Grafton 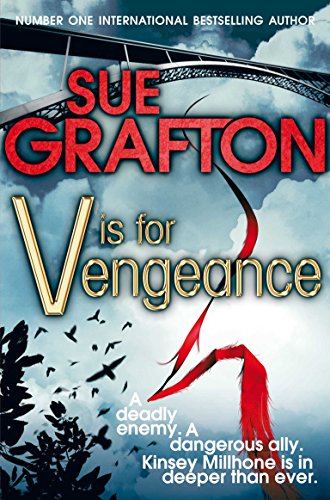 V is for Vengeance by Sue Grafton

The alphabet mysteries continue with a dramatic case for private investigator Kinsey Millhone.

V is for Vengeance by Sue Grafton

V is for Vengeance is the twenty-second in the Kinsey Millhone mystery series by Sue Grafton.

Las Vegas, 1986. A young college graduate is murdered when he is unable to pay back a loan funded by notorious criminal Lorenzo Dante.

Two years later private investigator Kinsey Millhone finds herself assisting to apprehend a shoplifter - Audrey Vance - in a shopping centre. Events take a much darker turn when Audrey's body is discovered beneath the Cold Spring Bridge, a local suicide spot.

Unable to believe she took her own life, Audrey's fiance Marvin Striker hires Kinsey to investigate. It soon emerges that the shoplifter had become caught up in a much larger operation.

Meanwhile Lorenzo Dante has begun to grow weary of his life in organized crime and frustrated with his violent and impulsive younger brother Cappi. While the police net begins to close in on him, Dante meets the beautiful Nora, who exerts a powerful pull over the gangster.

As Kinsey's enquiries reach a dramatic head, it becomes clear that she and Dante have one thing in common - they must be careful who they trust . . .

Sue Grafton has become one of the most popular female writers, both in the UK and in the US. Born in Kentucky in 1940, she began her career as a TV scriptwriter before Kinsey Millhone and the 'alphabet' series took off. Two of the novels B is for Burglar and C is for Corpse won the first Anthony Awards for Best Novel. Sue wrote twenty-five novels in her alphabet series, the last was Y is for Yesterday, before her death in California in December 2017.
GOR004042322
9780330512770
0330512773
V is for Vengeance by Sue Grafton
Sue Grafton
Kinsey Millhone Alphabet series
Used - Very Good
Paperback
Pan Macmillan
2012-08-02
544
N/A
Book picture is for illustrative purposes only, actual binding, cover or edition may vary.
This is a used book - there is no escaping the fact it has been read by someone else and it will show signs of wear and previous use. Overall we expect it to be in very good condition, but if you are not entirely satisfied please get in touch with us
Trustpilot